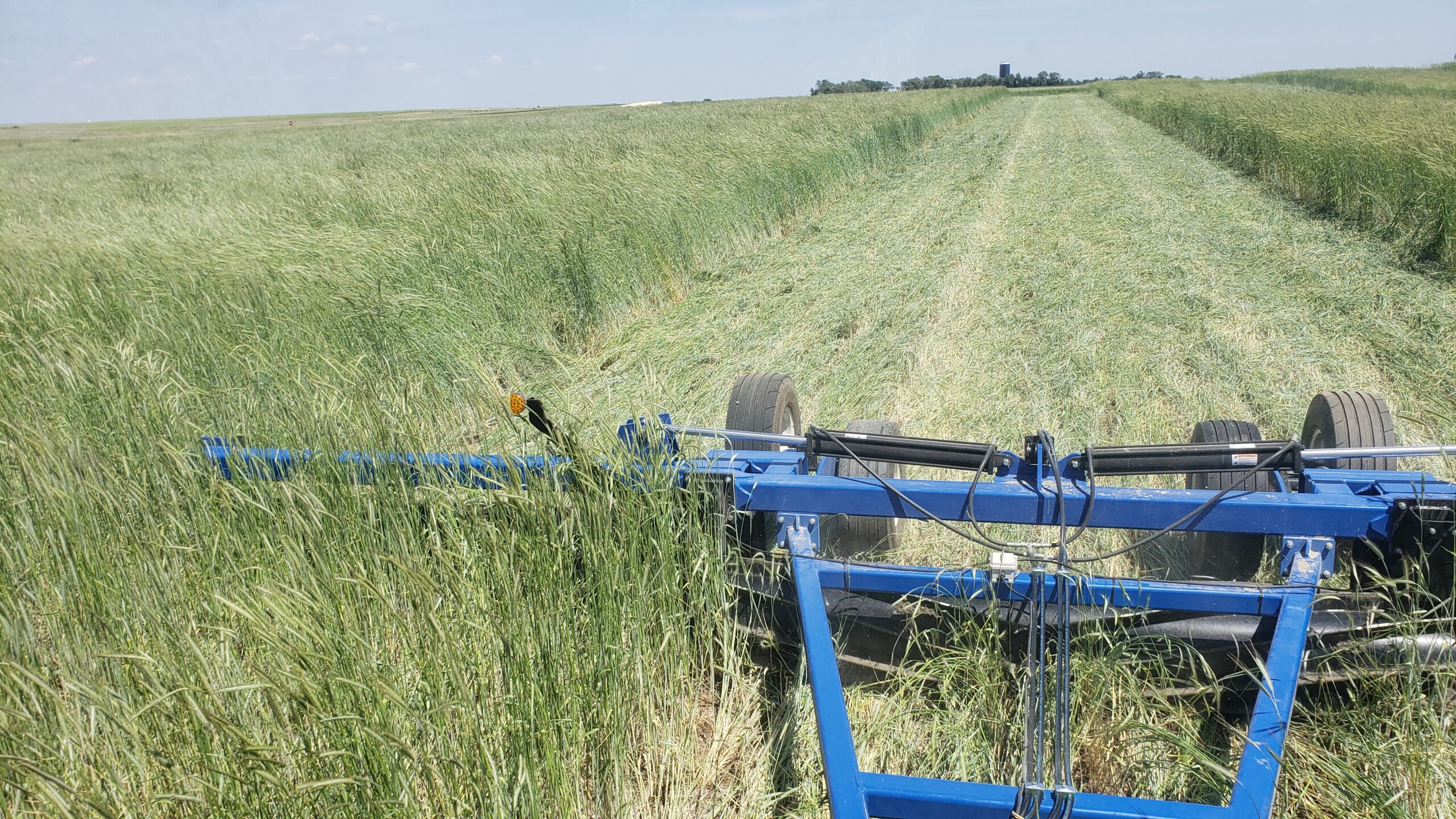 With dry conditions still covering most of South Dakota, increasing water infiltration rates and water storage capacities is an important task for the state’s agricultural producers. Some of them have turned to cover crops to improve the water use efficiency of their land. Those cover crops will also reduce erosion, sequester carbon, feed soil organisms, provide livestock forage, suppress weeds, and aid nutrient cycling; however, they must be managed correctly.

In a drought year, it’s important to remember that overwintering cover crops use water as they put on new growth in the spring. If soil moisture levels drop too low, it can negatively affect the cash crop following the cover crop.

One popular crop combination is a cereal rye cover crop followed by soybeans. The rye grows deep roots in the spring, which improves the soil, and creates significant biomass, which covers the soil and suppresses weeds. All that growth requires a lot of water. In a wet year, that’s a benefit because it can allow producers to operate equipment in the field sooner. In a drought year, it can leave the soil too dry for the young soybean crop.

“In an ideal year, we would have that cereal rye planted in the fall, and we would let it continue to grow until it got to about early boot stage and then plant our soybeans into the rye green,” Producer Matt Leischner said. “And then we just let that rye grow until it hits the anthesis stage, which is right around pollination stage. Once it hits that point, then it’s at the right stage where that roller-crimper will terminate the cereal rye crop.” 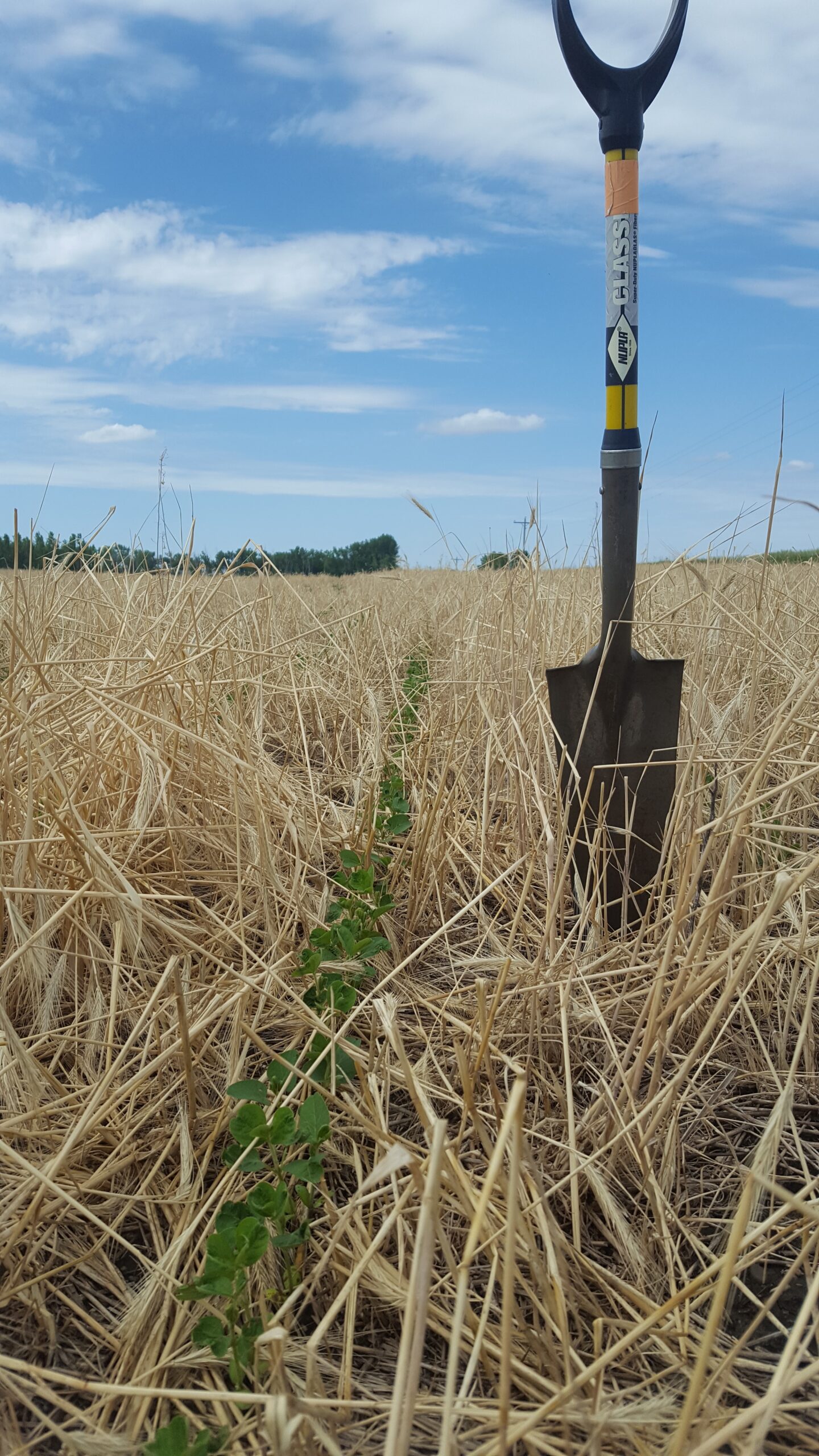 Leischner, who grows corn, soybeans, rye, oats, and winter wheat with his brother, Max, southwest of Parkston, SD, said that his area is dry right now. “It’s starting to be a concern,” he said.

“You have to make that call every spring, especially in our region, that if it’s too dry, you have to terminate that cereal rye and not let it grow too much,” Leischner said. “If it is dry, it will hurt the bean yield.”

“If it gets in that late April timeframe and it’s just looking pretty dry,” Leischner said, “we’ll go ahead and terminate that rye either right after or right before we plant those soybeans.”

Craig Stehly, who farms with his brother, Gene, near Mitchell, SD, said that in a very dry spring, he might terminate the rye a week or two before planting. “I had to do that last year because we had such a dry spring. I terminated it probably the first week of May, and I planted those fields probably a week later,” he said.

Stehly said, however, that if the soil was only a little bit dry, he would still plant his soybeans into green rye before terminating the cover crop. “I still think the soil health benefits outweigh what moisture that rye uses,” he said. “You got to have August rainfall for soybeans, anyway. I’d give up a little moisture for the benefits of the green cover crop.”

The weekly U.S. Drought Monitor offers producers a general overview of moisture levels across the state (https://bit.ly/3vjNwte). However, because conditions can vary locally, producers need to check their soil.

Natural Resources Conservation Service Conservation Agronomist Eric Barsness said that it’s important to monitor moisture levels deeper than just the top four inches of soil. “Get out there with the soil probe or even just a simple spade – probably something just a little bit deeper or bigger than just the plier handle.”

Barsness said that a soil moisture level of 70 percent or below is a good threshold to start thinking about early cover crop termination. “Once you hit 50 percent or below, it’s almost too late,” he said.

Producers also need to have a good feel for their weather patterns. If there is a prospect for rain on the horizon, it might be worth letting the cover crop grow longer, even if moisture levels are low.

However, predicting the weather two or three weeks into the future is a difficult task, Barsness said. “You’re going to have to have a little bit of luck on your side and have a feeling for what the weather patterns have been doing,” Barsness said. “If you’re in those 30-40 percent chances of rain and they are hitting a half-inch to an inch at a time, then I’d say you’re more in a wetter pattern. If you’re getting those 30-40 percent chances of rain and you’re not getting anything, then we tend to be in a drier pattern. So, you kind of have to go with a gut feeling call and hope it works out.”

Producers who normally use a roller-crimper to terminate their rye will likely need to use another method if they are forced to terminate early because for a crimper to be effective, the rye needs to be mature. Barsness said that haying could be one method of termination. However, most producers will likely use herbicides.

South Dakota State University Extension Agronomy Field Specialist Sara Bauder said that producers using herbicides to terminate their cover crop should consider their crop rotation first. “There’s really a pretty good gamut of chemicals that can kill a cover crop,” she said. “It’s the rotation restriction that’s the issue. That’s why you should plan ahead and start looking at a rotation restriction table and herbicide labels, depending on what your next crop is.”

As many cover crops are not yet listed on herbicide labels, Bauder suggested looking for updated labels and research data. If no label information is available, she said a bioassay may be needed.

Bauder also cautioned producers who might be tempted to use tillage as a termination method. “Especially because it’s dry, if producers really want to retain their moisture, tillage is just not the way to go because they’re going to have poorer infiltration, more runoff of the little bit of moisture that they do get. And of course, tillage does dry out that top layer.”

While it’s unfortunate to have to terminate a cover crop early, Leischner said there’s still cause for optimism. “Initially it seems like you’ve wasted all that money – there’s quite a bit of money put into establishing that rye crop as a cover crop – but just because we weren’t allowed to let that plant grow into maturity, there’s still a lot of productivity in the soil that is still benefitting us.”

To learn more about cover crops and cost-share programs, contact the South Dakota Soil Health Coalition at sdsoilhealth@gmail.com or 605-280-4190 or visit www.sdsoilhealthcoalition.org.

Matt Leischner used a roller-crimper to terminate this cereal rye cover crop near Parkston, SD, in early June 2021. Soybeans are already growing in the rye, but they won’t be damaged by the crimper. Photo courtesy of Matt Leischner.