Finding the right water solutions for a rotational grazing plan 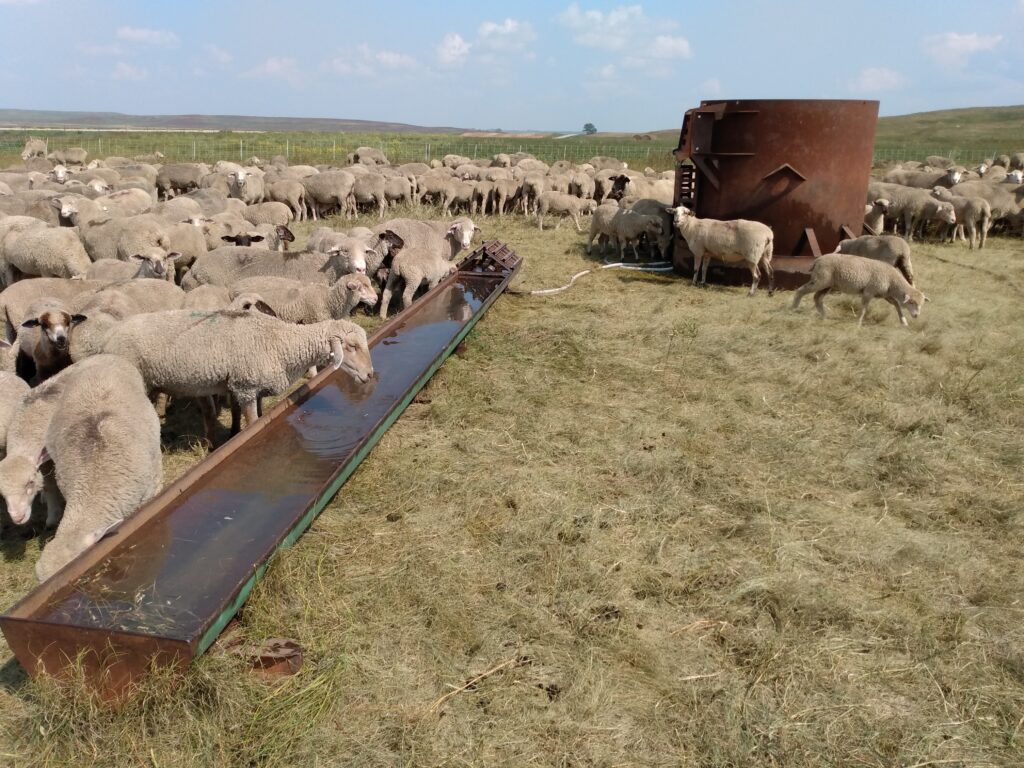 PIERRE, SD – What does a pasture have in common with a marathon runner?

“A marathon athlete, for instance, doesn’t train the full length of an actual marathon in their practice sessions,” he said. “If that human trained and performed 26 miles day-in and day-out leading up to their actual event, by the time their event rolls around, they might not have the physical capability of performing to their best level because they’ve overdone it. Season-long grazing is potentially the same thing for our plants.”

Just like a runner won’t be able to perform well if they have overexerted themselves in practice, grazing lands won’t be as productive if they have been sequentially grazed closer and closer to the ground through season-long grazing.

That’s where rotational grazing can help. It’s a system in which a producer’s grazing land is divided into smaller pastures. The animals are concentrated in one pasture at a time, allowing the other pastures to put on more growth, develop their root systems and capture carbon.

“Having rotation available to us for livestock grazing enhances plant health and vigor,” Herrmann said. “It improves soil health, water infiltration, the ability of the plant life on the landscape to perform photosynthesis and store carbon in the organic matter of the growing plants and their living roots.” 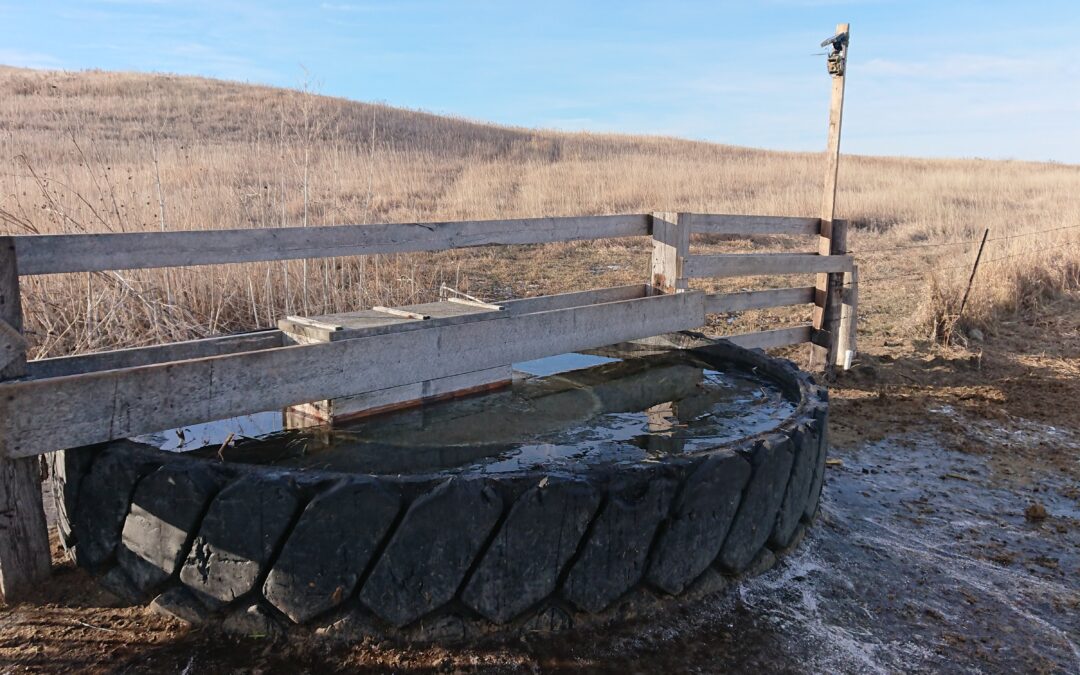 This is a typical tire tank used by the Permans. It is 12 to 13 feet in diameter and has a 5-foot cement skirt and a 10-inch PVC riser pipe. An insulated float box provides geothermal heat to prevent the float from freezing up during winter. Photo courtesy of Luke Perman.

Rotational grazing is good for livestock and the landscape, but it does come with its own challenges to consider.

One of those is water.

Figuring out how to supply water for the livestock to each individual pasture is a puzzle that every producer will need to solve.

The first step in designing a rotational grazing water plan is identifying a source, Herrmann said.

“Is there water that can be accessed nearby? Are there dependable surface water structures such as ponds, dugouts, or dams in each pasture? Is there rural water available nearby? Can I drill a well?” he asked. “Is there power available to move that water, or do I need to investigate a solar powered pumping system? If we’re operating from a private well, there’s got to be some mechanism of hydraulically moving that water from Point A to Point B in the form of your water tank or automatic waterer.”

The most economical source over the long term will likely be rural water, Herrmann said.

“The least expensive option is probably going to be – if it’s available to you – rural water, particularly if that access meter is already bought and paid for,” he said. “But if it’s flowing nearby or just across the road and you’re able to purchase a tap, provided there’s volume available for that system to provide service, mostly likely that will be the least-cost option to you over that 20- or 30-year lifespan of the infrastructure, the pipeline and the watering facilities.”

Luke Perman operates Rock Hills Ranch near Lowry, SD, with his wife, Naomi, and his parents, Lyle and Garnet. Their operation has cow-calf, stocker yearling, and custom-grazed sheep enterprises, and they have been using rotational grazing for more than 30 years. Their livestock are moved between pastures every one to seven days depending on the herd, the time of year, and which pasture they’re in.

Perman said that his family’s operation uses a variety of different water sources.

“We’ve got three wells that we use to pipe water that services two-thirds of our ranch, probably,” he said. “That other third is mostly serviced by rural water. We do have some springs that we utilize as well as a trash pump that we use for pumping out of dugouts and dams. Rather than letting the cattle go in and foul up the water, we’ll fence out those water holes, and we’ll just pump out of the dam into a water tank for them.” 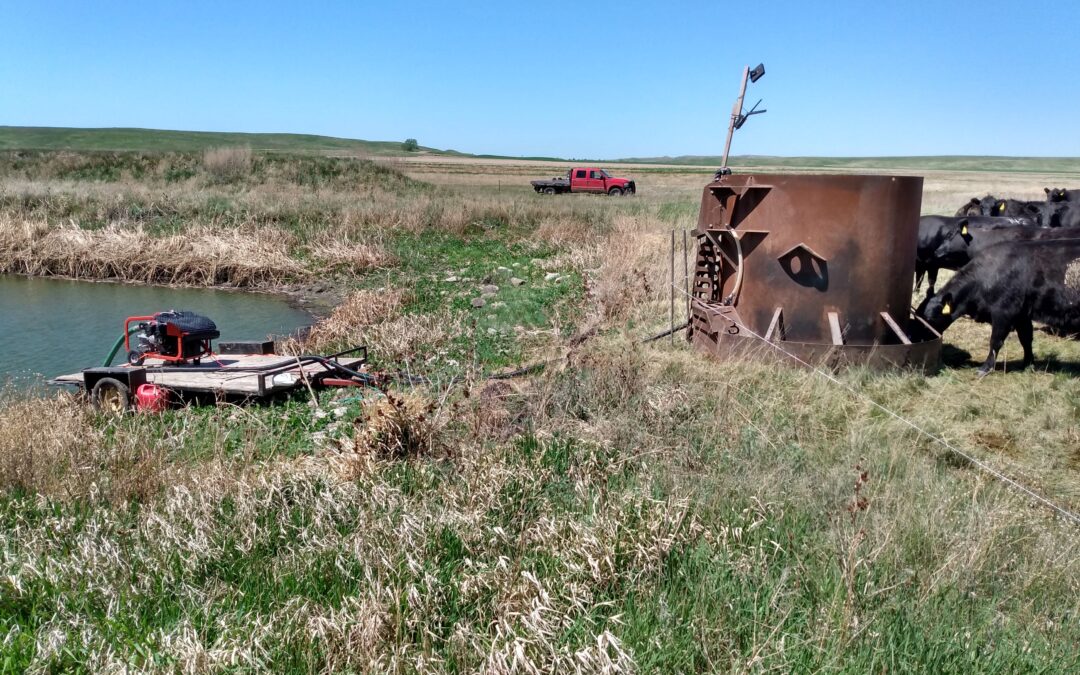 Luke Perman uses this auto-start-and-stop trash pump to pump water out of dugouts and dams. Photo courtesy of Luke Perman.

Once a water source has been identified, the next step is to figure out how to deliver it to the cattle. Should the pipeline be buried, or will the planned season of use allow the pipeline to remain aboveground or buried shallow?

“The servicing pipeline aboveground often times is going to be just as suitable as buried pipeline for many operations,” Herrmann said.

He pointed out that it’s sometimes easier to get permission to cross a neighbor’s land with aboveground pipe to connect with a water source. When livestock are no longer in that pasture, the producer can pull the pipeline back across the property line.

“In recent years, we have used more and more aboveground pipe,” Perman said. “Sometimes that’s just for summer use, so we don’t really need to have the expense of burying everything. Sometimes it’s because it’s leased ground, and maybe my landlord doesn’t want to invest a lot of money in water infrastructure. So, we just run it aboveground. Sometimes it’s just a matter of ‘We need to get something out there right now.’“ 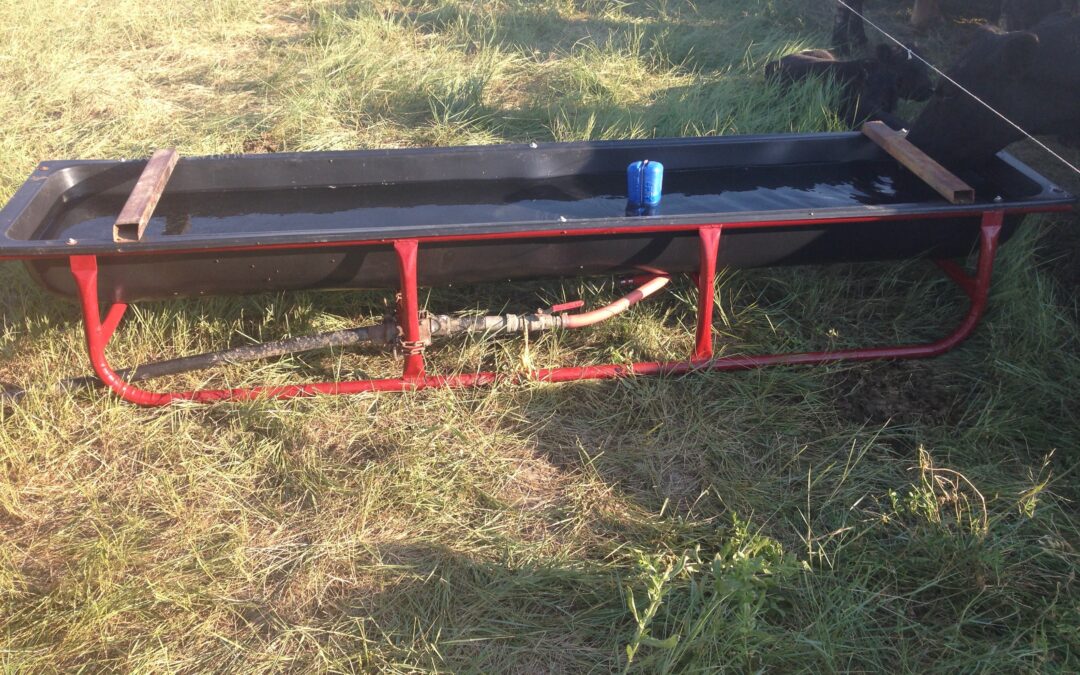 This type of portable water tank is served by aboveground, portable pipeline and normally has a cover to protect the float during use. An ATV can pull this tank and 2,000 feet of pipe to its new location each day. Photo courtesy of Pat Guptill.

Mobile watering tanks are another way to deliver water to livestock.

“Mobile watering facilities are an excellent idea, particularly for someone who is implementing a fairly intense management scheme, as far as the grazing is concerned,” Herrmann said. “The real value in that is that you might only have to purchase one, two, or three of those setups to service your entire livestock herd and be able to service dozens of pastures with that one or two or three items.”

Perman said that his family has a couple of mobile tanks that they move frequently, sometimes for use with a trash pump, for use with sheep, and to supplement water installations that were designed for a smaller herd than he currently places in a pasture.

Regardless of the type of watering facility in use, the Permans use cellular-enabled game cameras with solar charged battery packs to monitor the water tanks. “They cost a little to get into, but data rates are cheap,” Perman said. “They save us boatloads of time checking water tanks.” 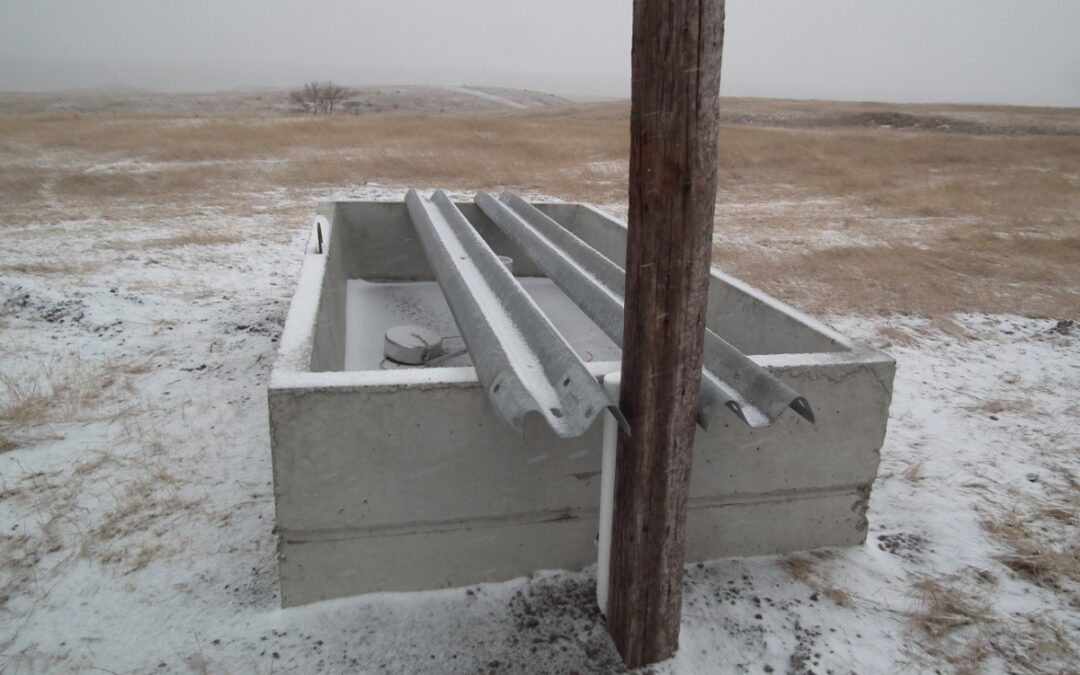 This is a precast concrete water tank with protections. Photo courtesy of USDA-NRCS SD.

“One thing I’ve kind of learned is that designing a water system is as much an art as it is a science,” Perman said. He noted a few things for producers to consider before installing a water supply.

“Always build with the idea that you’re going to expand on the system in 10 years or 5 five years. Some of our early installations are all inch-and-a-half or maybe inch-and-a-quarter waterline with maybe an 8-foot tire tank, and that was fine for 150 cows, but it’s not fine for 300 (cows) or 500 or 600 yearlings,” he said. “Anytime we’re doing any kind of permanent installation at this point, we’re making sure that we have the ability to expand by either adding a second tank at that site or doing an aboveground waterline that we can run from that location a half-mile away.”

Another mistake to avoid, Perman said, is making an installation permanent before it has been tested. 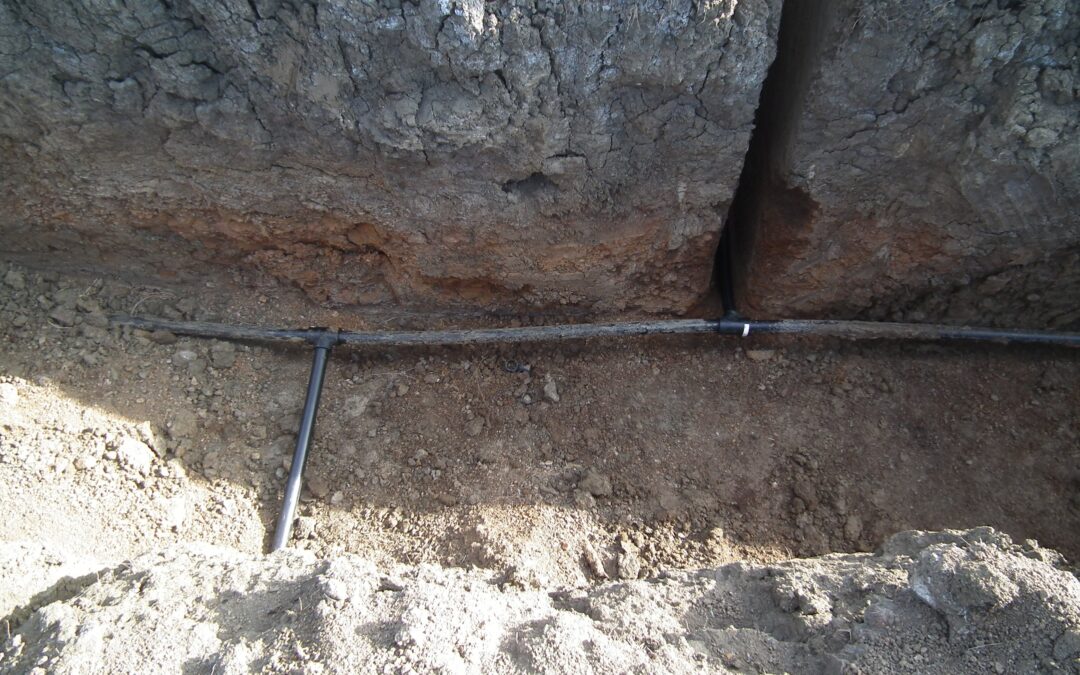 “The main mistake we’ve made is making it permanent, thinking, ‘This is exactly how it needs to be, and it’ll never need to be any different,’” he said. “I feel like the best scenario is you run aboveground pipe with a portable tank, and you put it there for five years, and if you’re happy with it after five years, then you bury it and you make it permanent. Because sometimes you spend all the money to get everything installed permanently, and then six months later you realize, ‘You know, we should have put it over there.’”

Herrmann noted that it’s important to make sure a pasture has enough water sources for its size.

“If I’ve got a 500-acre pasture and only one watering tank out there, that can be a concern if that tank is clear up in the far corner of that pasture and the animals have to walk three-quarters of a mile or more,” he said. “All of sudden we’re giving up gains in performance in those livestock simply because of the amount of exercise they have to put forth to go get a drink of water.”

Perman also said producers should do their homework on what type of valve they should use on their water tank.

“I’ve gone to using just about exclusively these full-flow type valves or diaphragm-type valves because just as soon as that water level drops half an inch, the water is coming in at the full rate rather than the other style where the water has got to drop close to a foot before you’ve got the full flow,” he said. “Well, that’s probably a fourth of your tank capacity sometimes if you’re waiting for it to drop a foot.”

“There are also multiple conservation entities in the state that offer financial assistance for livestock water, fencing and making livestock use of cropped land a possibility,” Herrmann noted.

“The technical advice that all of them provide is really helpful if you’re not sure what to do or you don’t have experience with designing these systems, especially if you’ve got things to worry about like elevation changes and that sort of thing,” Perman said.

“My best suggestion is visit with your local conservation district or Natural Resources Conservation Service. Visit with SDSU Extension. And a wealth of knowledge often comes in the form of your neighbors’ experience. If you have neighbors that have livestock and already have their pasture system set up, ask them what they’ve done in the past,” Herrmann said. “Take advantage of the lessons that other people have learned rather than making the same mistakes yourself.”

To learn more about rotational grazing and how it can benefit your operation, visit www.sdsoilhealthcoalition.org or contact the South Dakota Soil Health Coalition at 605=280-4190 or sdsoilhealth@gmail.com. 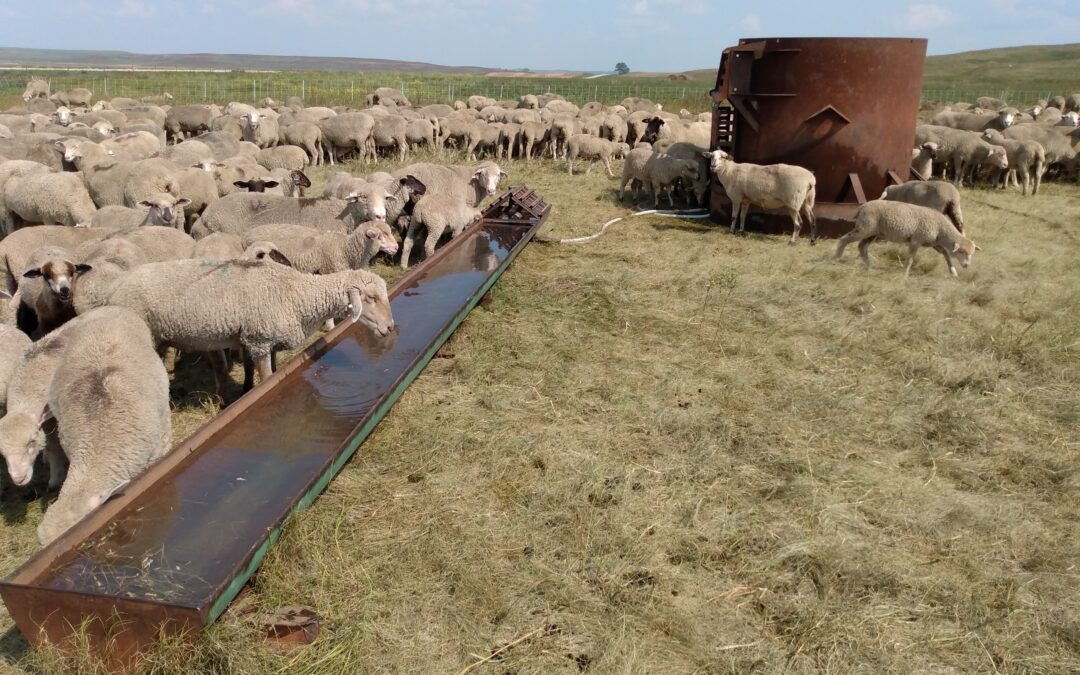 The Permans use this portable water setup for about 800 ewes with 1,200 lambs because their tire tanks are too tall for the lambs to reach. Photo courtesy of Luke Perman.