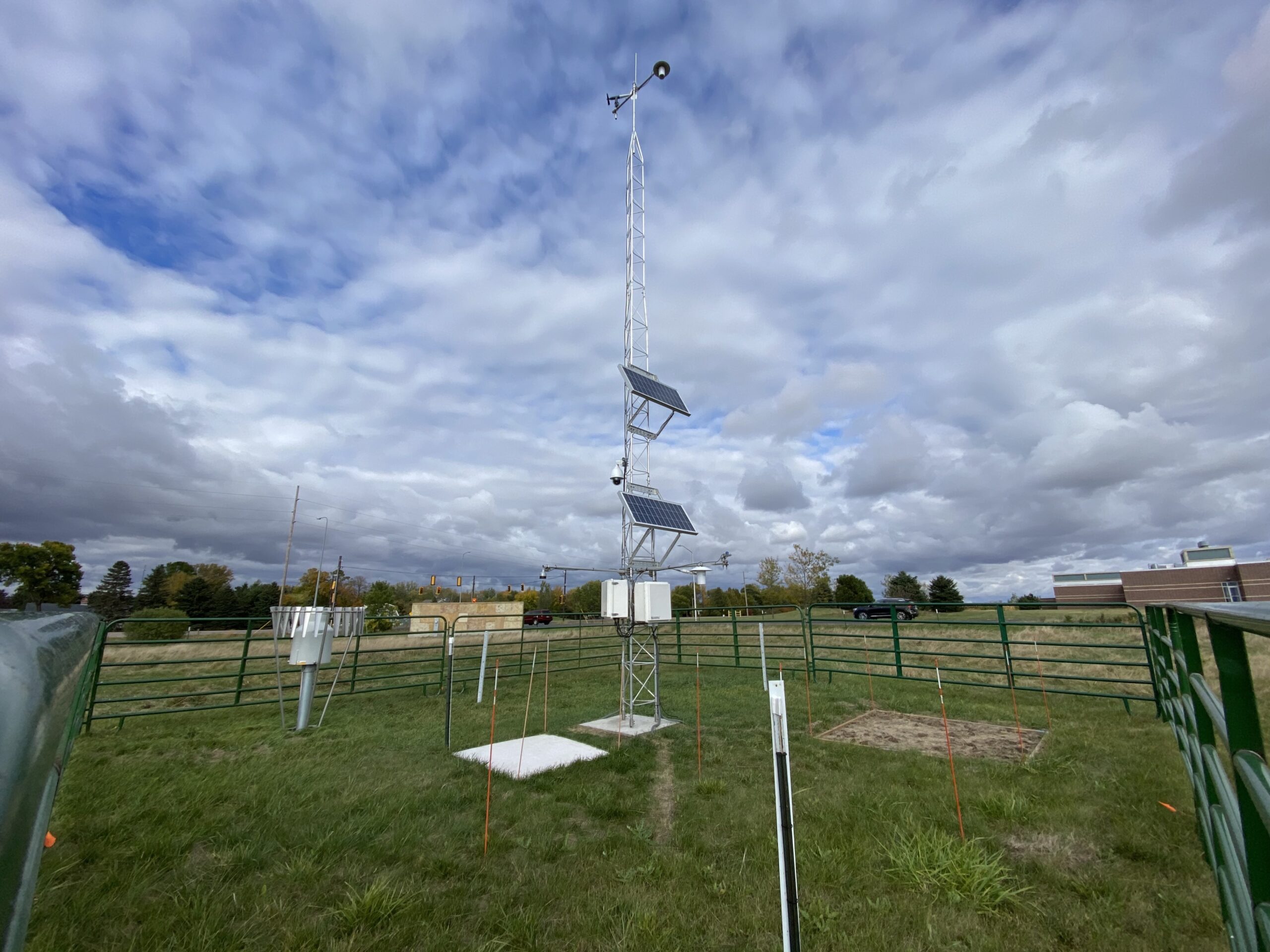 The South Dakota Mesonet currently has 32 weather stations in the state, according to Mesonet Director Nathan Edwards, and it’s about to get a lot more. That’s good news for agricultural producers who make use of the network.

“The Mesonet is the state’s network of weather stations. Mesonet is short for Mesoscale Network. Mesoscale weather is weather that happens on shorter time scales and shorter scales of distance than what typical weather stations look at,” Edwards said. “So, our stations are closer together, and they measure every five minutes to capture those smaller, more dynamic events of weather.”

Thanks to the efforts of South Dakota’s congressional delegation, the Mesonet will be able to take advantage of a U.S. Army Corps of Engineers program to drastically increase its number of stations over the next several years.

The Corps of Engineers is responsible for managing the runoff in the Upper Missouri River Basin, which includes nearly all of South Dakota, and the Mesonet is being beefed up to increase the state’s ability to monitor for flood and drought, Edwards said.

“We’re looking at something like 150 stations total in South Dakota – one every 500 square miles – so there’ll be hardly a South Dakotan who’s not within 20 miles of a station. It’s a game changer,” he said.

The first new stations will be installed this summer.

“We’re actually starting on our first 14 this summer. A few of them are upgrades. Most of them are going to be where we had stations before but aren’t currently reporting from,” he said. “We’ll add 11 to our total station count.”

Care is taken to site South Dakota Mesonet stations in representative soils. All new or upgraded stations will have their soils sampled and analyzed by partners at the Natural Resources Conservation Service. South Dakota State University photo.

“So your typical weather station, we do wind and temperature and humidity and rainfall and that kind of thing, but we have a special focus in agriculture. Actually, we have just as many measurements below ground as we do above ground,” Edwards said. “We do soil temperature and soil moisture at five different depths going down to 40 inches. That’s under grass, and then under bare soil we have a 4-inch temperature sensor. Out of those, we can get what the soil moisture profile looks like.”

In addition to current conditions and local forecasts, the data generated by Mesonet is channeled into various tools that can be of use to producers who are making management decisions. These include ag weather, degree days, livestock stress, small grains disease, and spray tools. Producers can see soil temperatures at different depths or see if there’s an inversion when they’re timing their chemical applications.

“The nice part about Mesonet is it’s ground-truthed. So, a storm comes through, and it updates every 5 minutes to the internet,” Edinger said. “So, you can pull it up on your phone and know within 5 minutes after the rain stops the total rainfall, or as it’s accumulating, you can check it as often as you like. It’s also great for checking windspeeds for spraying.”

Edinger said that nearest weather station is 25 miles away from some of his fields, and that distance is useful because it allows him time to pull a sprayer out of a field before the increased winds reported by that weather station hit his operation.

“The timeliness of it and the accuracy of it, and the ability to pull it up on your phone wherever you’re at makes it, for us, a valuable tool,” he said.

Edwards explained how Mesonet’s ag weather tool can show the exact point when the water demands of a crop begin to outstrip the precipitation that was supplied. This tipping point has long been used by irrigators in their decision-making but can also be used by dryland farmers to gain insight into water balance.

“Your soil is your checking account, and you’re making deposits of moisture in terms of precipitation, and then evapotranspiration is your demand,” he said. “You know even when you’re making less deposits each day than you are withdrawals, you can keep that up for a certain amount of time, but once you’ve exhausted the moisture reserves in your soil, that’s kind of like maxing out your checking account, and then you impact your yield at that point.” 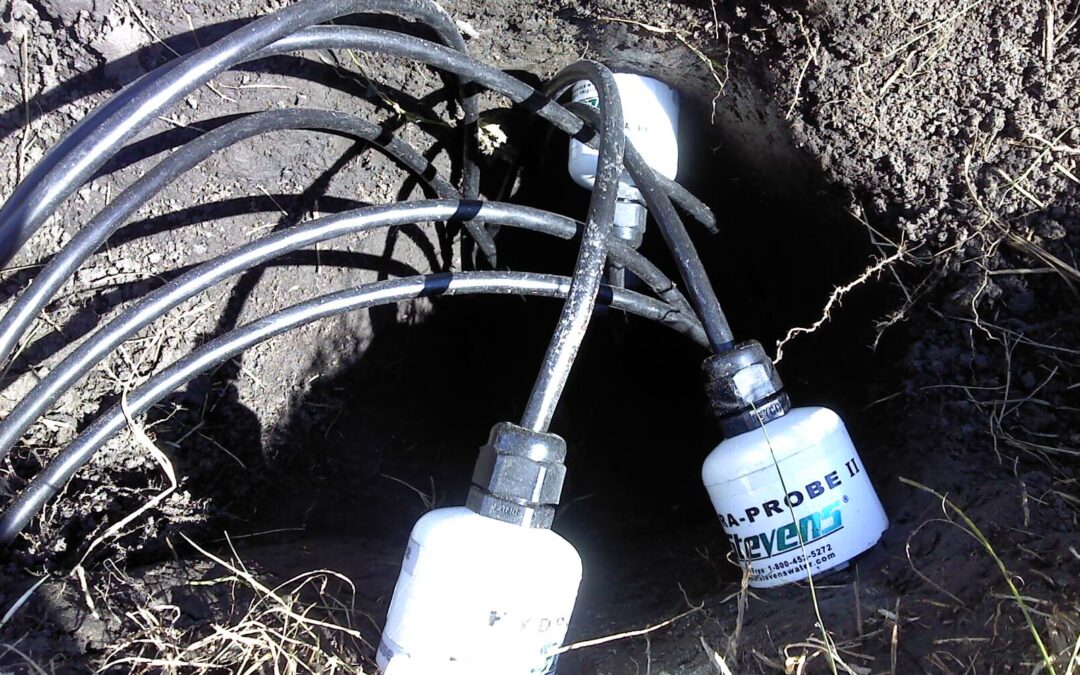 Looking down at the soil probes before burial at a South Dakota Mesonet weather station. The sensors collect measurements of moisture and temperature at depths of 2, 4, 8, 20 and 40 inches under perennial grasses. South Dakota State University photo.

The Mesonet offers some useful observations for producers who are concerned about their soil health. For instance, they can see the temperature differences between covered and bare soil to understand the value of having good residue cover on their fields.

“One thing that the people who are looking at the pros and cons of different tillage practices, for example – a lot of times people are looking for a soil temperature of 50 degrees as their trigger threshold for planting, and if you look at when that happened with 4-inch (deep) bare (soil) versus when that happens with a 4-inch (deep) sod, you know what the delay is there,” Edwards said. “You know, how much does it really cost you in terms of planting delay?”

“Soil health is a big way of looking at just doing the right thing. And it’s not only just doing one thing. It’s about doing everything as good as you can,” Edinger said. “So, when it comes to spraying or information on your field, when it comes to moisture, what the soil temps are, (the Mesonet) is a nice tool to know where you are management-wise with your property. And if you’re doing everything as good as you can, it’s better for the soil health. It’s better for the land.”

The new and upgraded weather stations will have a focus on soil moisture.

“Some of the real significant upgrades are keeping track of water year-round, above and below the surface. So, all of these stations will have the full profile of soil moisture sensors and soil temperature sensors,” Edwards said. “They’ll be able to measure snow depth. They will also be able to measure precipitation all year round. Currently we only do rainfall, and this will give us the capability to measure the liquid equivalent of the snow.”

The push to improve Mesonet started with a flood in 2011, he said.

“The flood of 2011 is what triggered this. That was triggered by a lot of water in the form of snow sitting on top of soil that was saturated, and there was a real lack of measurements to be able to assess what that situation was. So, this is really a way to improve that,” Edwards said. “The capacity of the Corps of Engineers dams on the Missouri River is 73 million acre-feet. The capacity of the soils in the Upper Missouri River Basin is over triple that. So, your largest reservoir, effectively, is your soil, and you don’t have a way to measure how full it is or isn’t, and that became very clear in 2011.”

“One of our biggest downfalls in agronomy or just the ag sciences, in general, is we don’t have a good understanding of soil moisture storage capacity and where it’s at, what the current status is,” South Dakota State University Soils Field Specialist Anthony Bly said. “I think if we could get that information in more real time on our own operation, in certain fields we could make better management decisions.”

Edwards said that most of the stations that have been installed in the last 10 years were placed in representative soils, and all the new stations will be placed in representative soil types. To further increase the accuracy of the data generated by the network, the Natural Resources Conservation Service has performed a full soil analysis at most current station locations, and all new stations will have their soils analyzed, as well.

The increased accuracy of the network is critical to agricultural producers because it is used to make decisions in government programs that affect them. Edwards said that in South Dakota, the Livestock Forage Program, which is triggered by the U.S. Drought Monitor, paid out over $210 million between 2012 and 2017 and that the Livestock Indemnity Program, which is triggered by various weather events, paid out over $47 million in South Dakota between 2012 and 2018.

“One of the primary purposes of this is to improve the accuracy and the timeliness of the Drought Monitor,” Edwards said. “The Drought Monitor is kind of decided on a county level. Certainly, the safety net programs that are triggered by it are based on whether or not certain shades of orange and red show up within county lines, and there are many counties that just don’t have that data.”

“As that network expands, and we get more and more sites with soil moisture probes, that will strengthen that data,” Bly said.

In this example plot (Gettysburg, 2020), soil moisture at each of the five depths can be seen to respond to precipitation (purple bars on top). Gray indicates frozen soils. South Dakota State University graphic.

Producers who would like a Mesonet station near them can sponsor one.

About 15 years ago, Edinger asked his father to put up the money to install a weather station in a field near a school in White Lake. The station would be able to use the school’s internet connection, and the school would be able to use the weather station in its science classes. Both his father and mother were former teachers, and the idea appealed to them. They donated the money to install the weather station, and every year since Edinger and his brother, among others, have contributed money for the maintenance of that station.

“You have to take this as a tool in your toolbox and utilize it like you do all the rest of your soil health tools,” Edinger said. “Like the no-till and the cover crops – the Mesonet data helps you make decisions on those items.”

Producers who wish to sponsor a station should visit Mesonet’s website at https://mesonet.sdstate.edu and use the “Contact Us” link. To learn more about how to increase soil’s water infiltration rate and water storage capacity, visit www.sdsoilhealthcoalition.org or contact the South Dakota Soil Health Coalition at 605-280-4190 or sdsoilhealth@gmail.com. 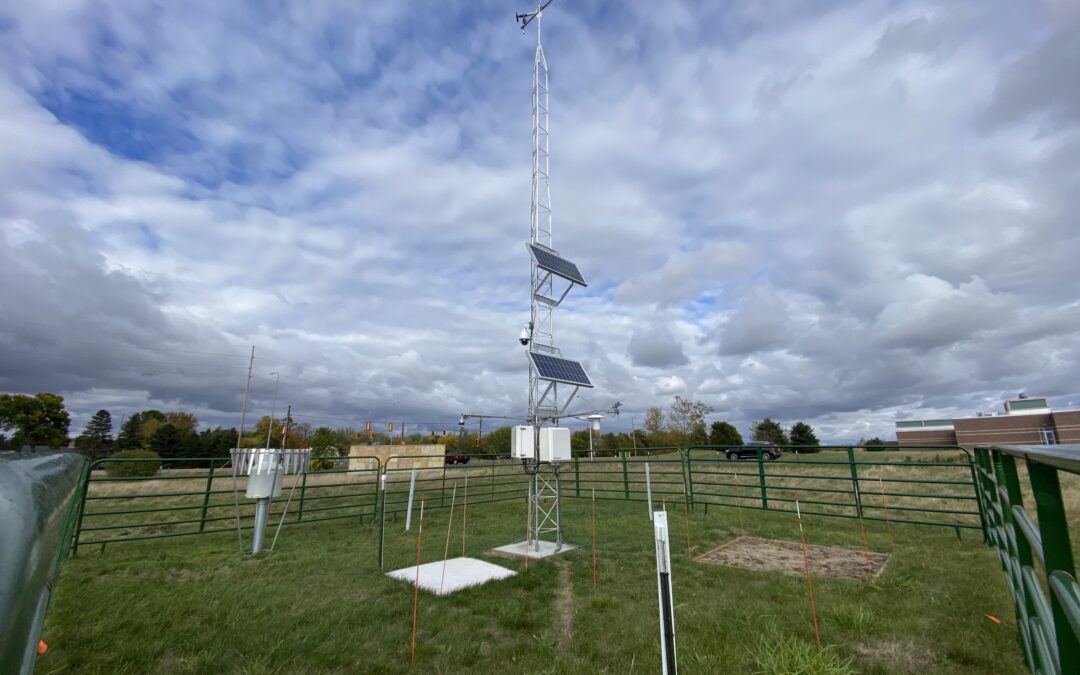 This station on the South Dakota State University campus in Brookings, SD, is the first of over 150 South Dakota Mesonet weather stations that will installed or upgraded over the next several years to provide enhanced water and weather monitoring. In addition to snow depth and year-round precipitation capabilities, soil measurements will play a central role. Temperature at a depth of 4 inches is measured in bare soil plot to the right of the station and is the standard for those managing conventional till operations. Moisture and temperature are measured at five depths under the perennial grass plot in the foreground. The 4-inch soil temperature is the standard for those making decisions for management of no-till operations. The whole profile is analyzed to calculate frost depth and thaw depth. South Dakota State University photo.