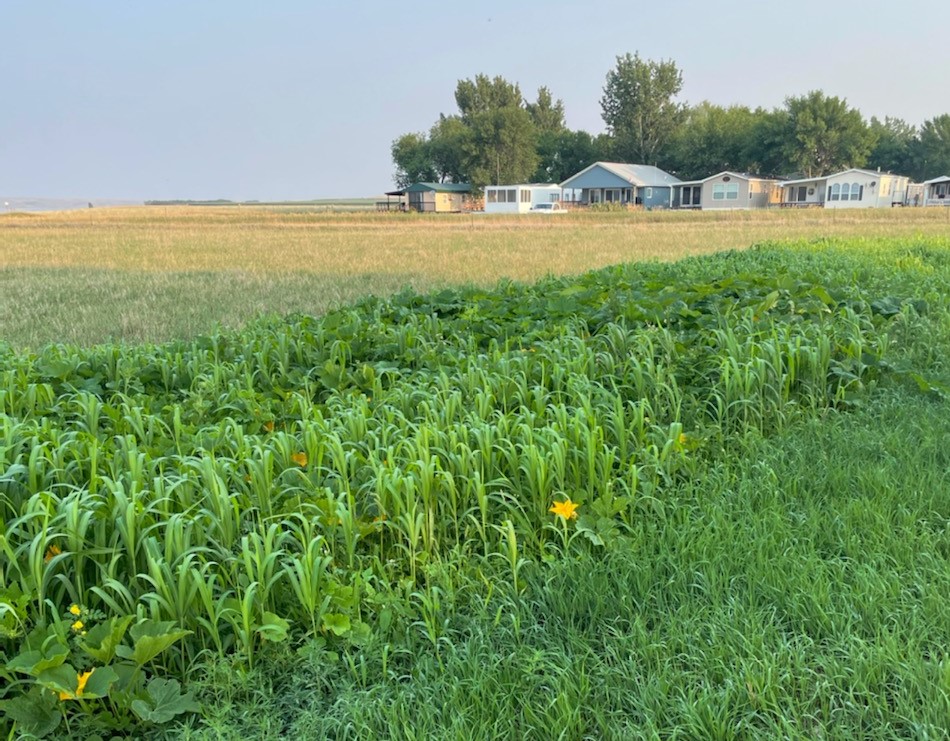 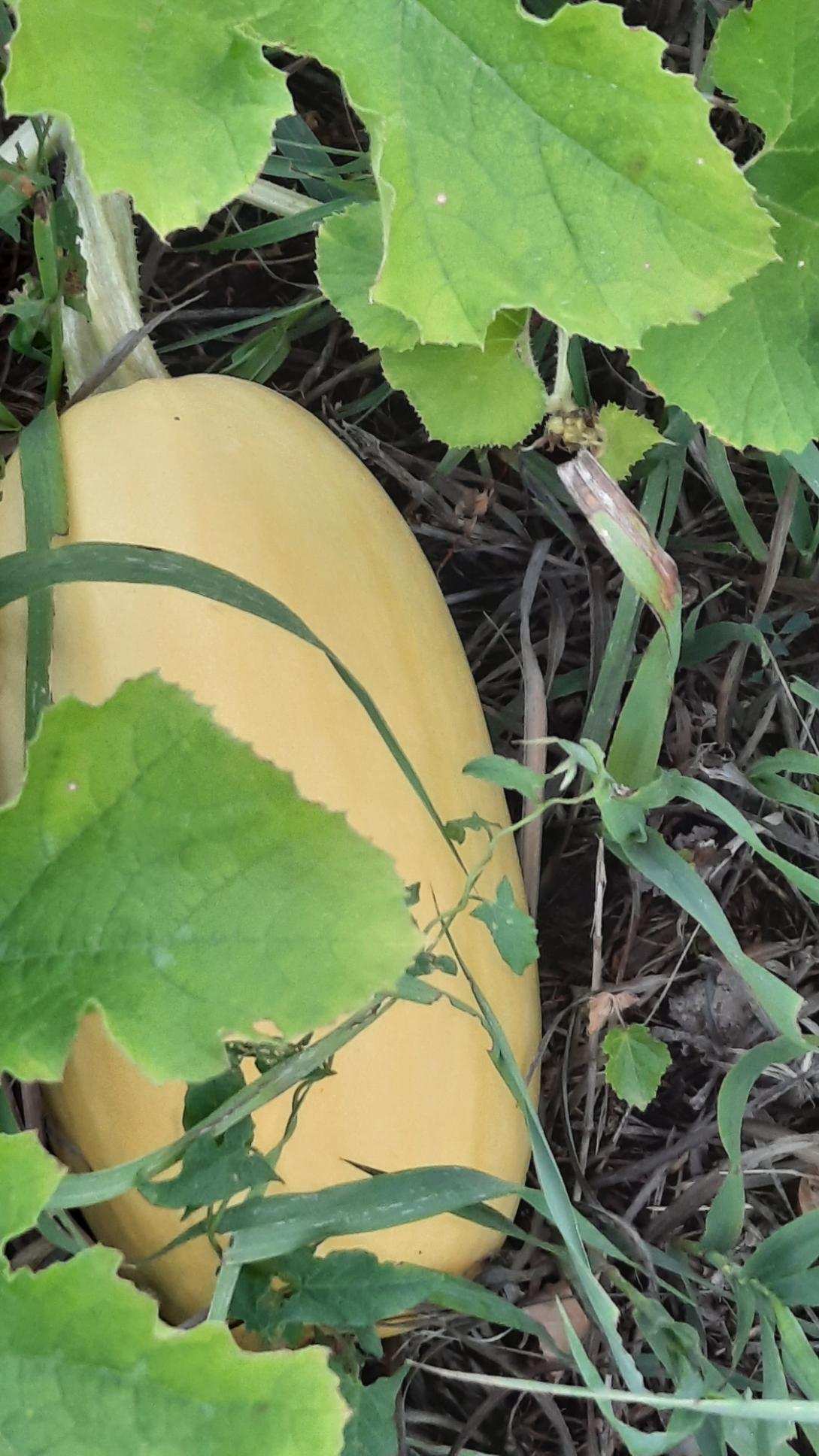 The chaos garden in the West Whitlock Recreation Area grew many different types of produce including squash and pumpkins. Courtesy photo.

Sometimes a little chaos provides an opportunity for growth.

That’s certainly the case with a chaos garden, also called a milpa garden. It’s a similar concept to the three sisters garden in which the three “sisters” of corn, beans and squash are planted together because each one benefits the growth of the others. The corn provides a tall stalk for the beans to climb, the beans fix nitrogen in the soil, and the large leaves of squash shade the ground, preserving moisture and suppressing weeds.

In a milpa garden, even more types of plants are included in the mix, and rather than being planted in neat rows, the vegetables are spread evenly across the garden. The result is a chaotic tangle of produce that offers more than just food.

This year, South Dakota Game, Fish and Parks District Park Supervisor Ryan Persoon discovered that a milpa garden can help bring a community together. This spring, he was approached by Dan Forgey, South Dakota Soil Health Coalition Board member and longtime Cronin Farms agronomy manager, who had a bag of seed.

“He mentioned he had this bag of seed that, at the time, he described as a milpa garden and a community garden,” Persoon said. “I didn’t know anything about what this was. Community kind of stuck in my head.”

Persoon runs the West Whitlock Recreation Area, which is next to a resort with summer residents, and he thought he could plant the garden in the park, and the people in the resort community could help grow the garden and then reap some of the rewards by taking some produce.

“At the time I didn’t really know what was in this bag of seed,” he said. “It was entertaining for us to plant this, see it grow, and see what would come to fruition and how it would impact our community. And I have to say it was quite the project. It was something I was very proud to be involved in.”

The community became very involved in the garden. “The excitement of the unknown was what we enjoyed the most out of it,” Persoon said. “It was thick. There was a lot of stuff to sort through. People enjoyed looking through it to find what they wanted, and that adds to the excitement of it.”

Persoon said the garden contained several different types of squash, pumpkins, turnips, Swiss chard, and other produce. “I saw certain people putting their names on some squash because they didn’t want them picked before they were ripe,” he said. “It’s a community, so everybody kind of shared in it, and it was really quite neat.” 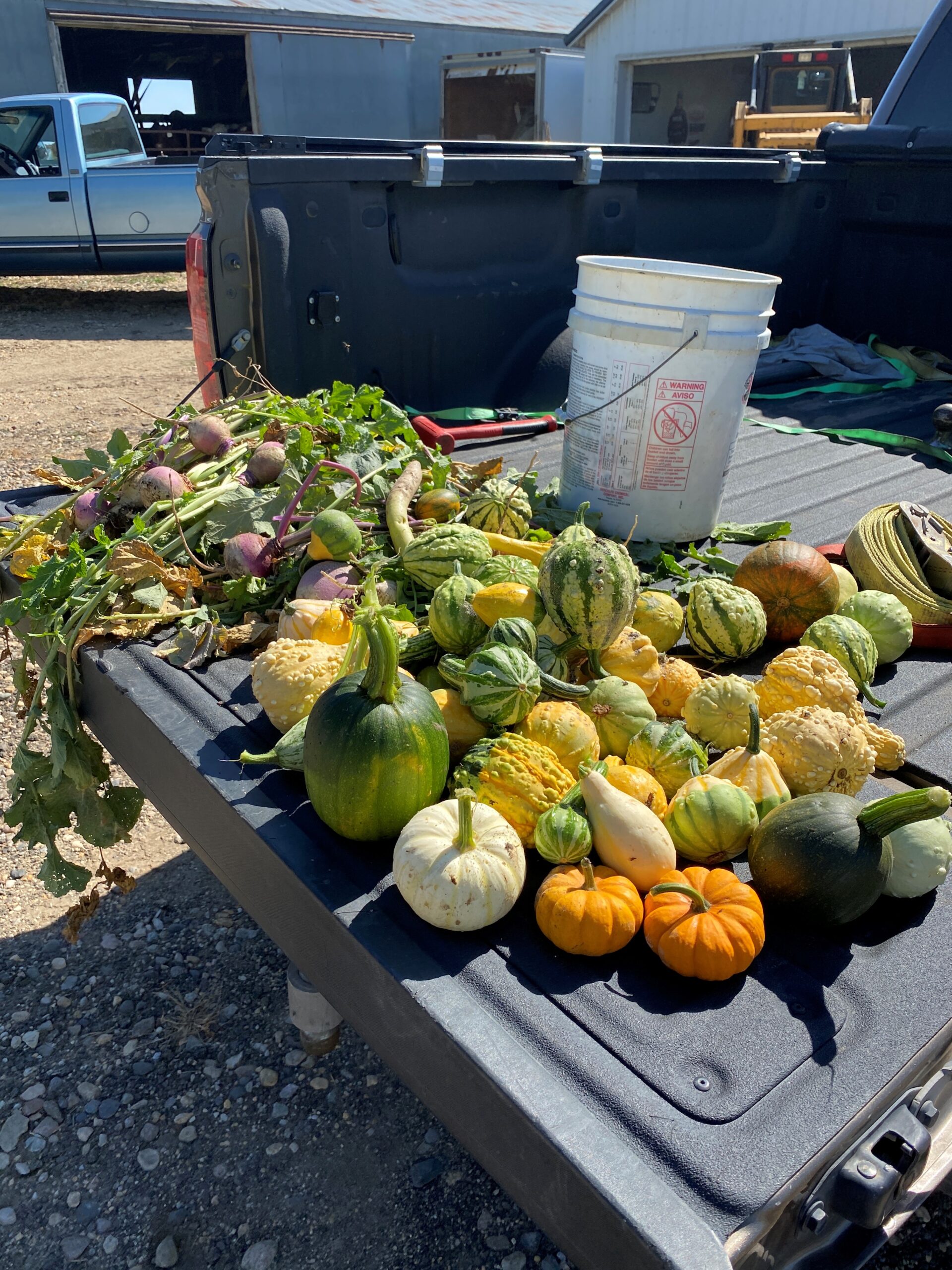 In addition to bringing the community together, the garden benefitted pollinators and wildlife. “It was attractive for pollinators, for birds, and I have no doubt this winter when a lot of the brassicas and the squash, the pumpkins freeze down, the deer are going to be all over those squash and pumpkins,” Persoon said.

Next year, he said, “we’re definitely going to do something like this again if not pretty much exactly the same thing again.”

“All of the soil is pretty well covered, and there’s something living on almost every square inch,” SDSHC Soil Health Technician Baylee Lukonen said. “When they call this a chaos garden sometimes, that’s exactly what it is. The plants are all working together.”

Lukonen grew a milpa garden on her farm near Watertown this year. “It was really cool to see that certain plants that have vining tendencies would actually vine up the sunflowers or the taller millet,” she said. “That’s how they were getting their sunlight. It’s just really cool to see all of it working together aboveground, and if it’s working together aboveground, there’s definitely a lot happening belowground that we can’t see.”

Lukonen also used her garden to interact with the community. She invited the local Boys and Girl Club to bring students out to her farm each week to learn about soil health and pollinators. 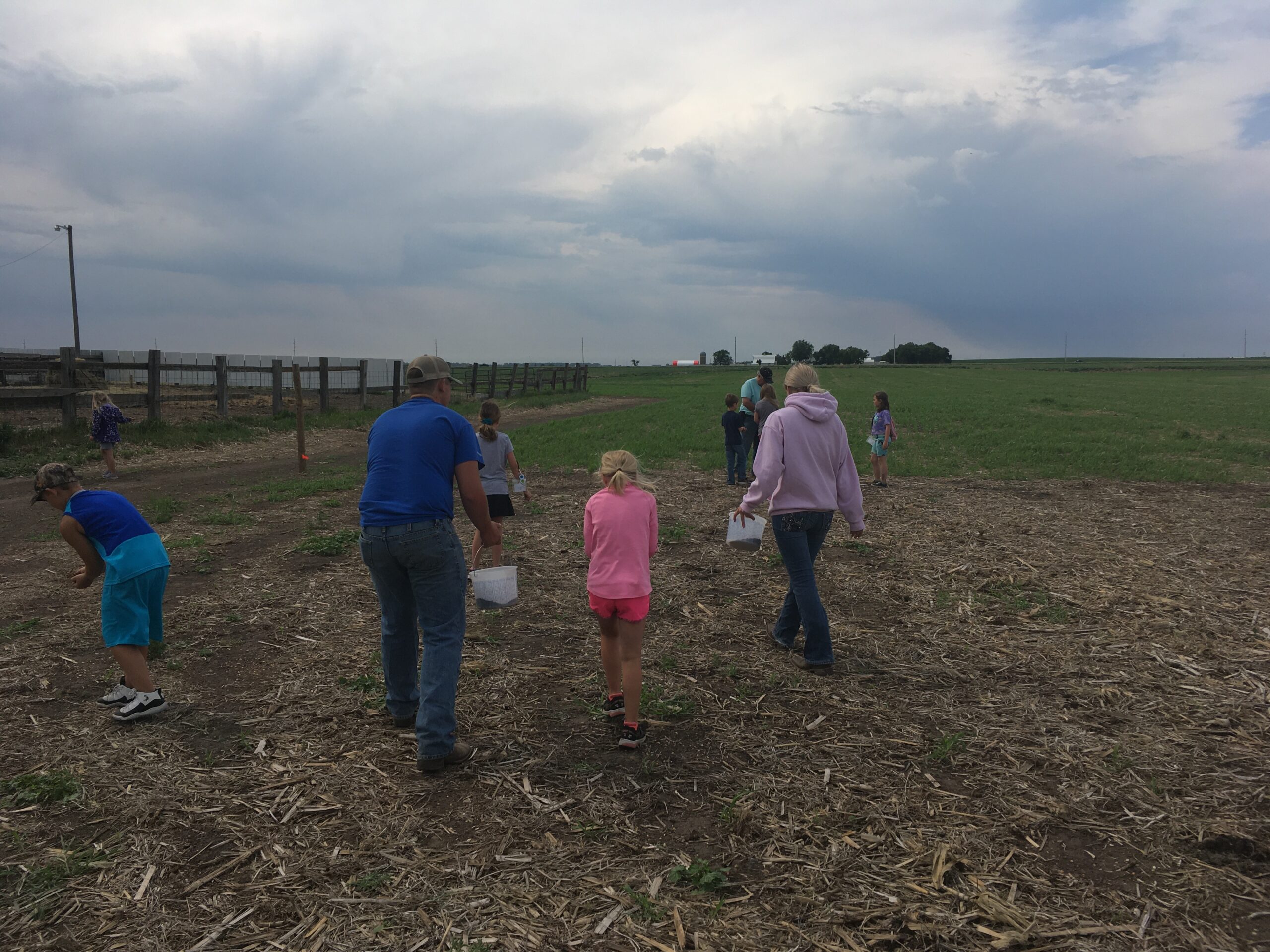 “We thought it was a great idea,” Watertown Boys and Girls Club Prevention Coordinator Brad Drake said. “We’re always looking for additional programs for the kids, particularly if there’s an educational component.”

“The Boys and Girls Club brought out a group of about 10-15 kids every Thursday for a good portion of the summer,” Lukonen said. “We just taught them about different things in the soil, soil properties, and we also taught them about the milpa garden and how everything that is in the milpa garden can grow together without being separated and planted into rows, which is different than your traditional garden.”

The students ranged in age from 8 to 12 years old.

“There was a real emphasis on soil health, of course, so they talked a lot about cover cropping,” Drake said. “It wasn’t always the same kids each week that went out, but some of them got to see the whole process from the planting, to learning why it was important, to how these various crops have benefitted the soil, and different nutrients they added or drew up and made available.” 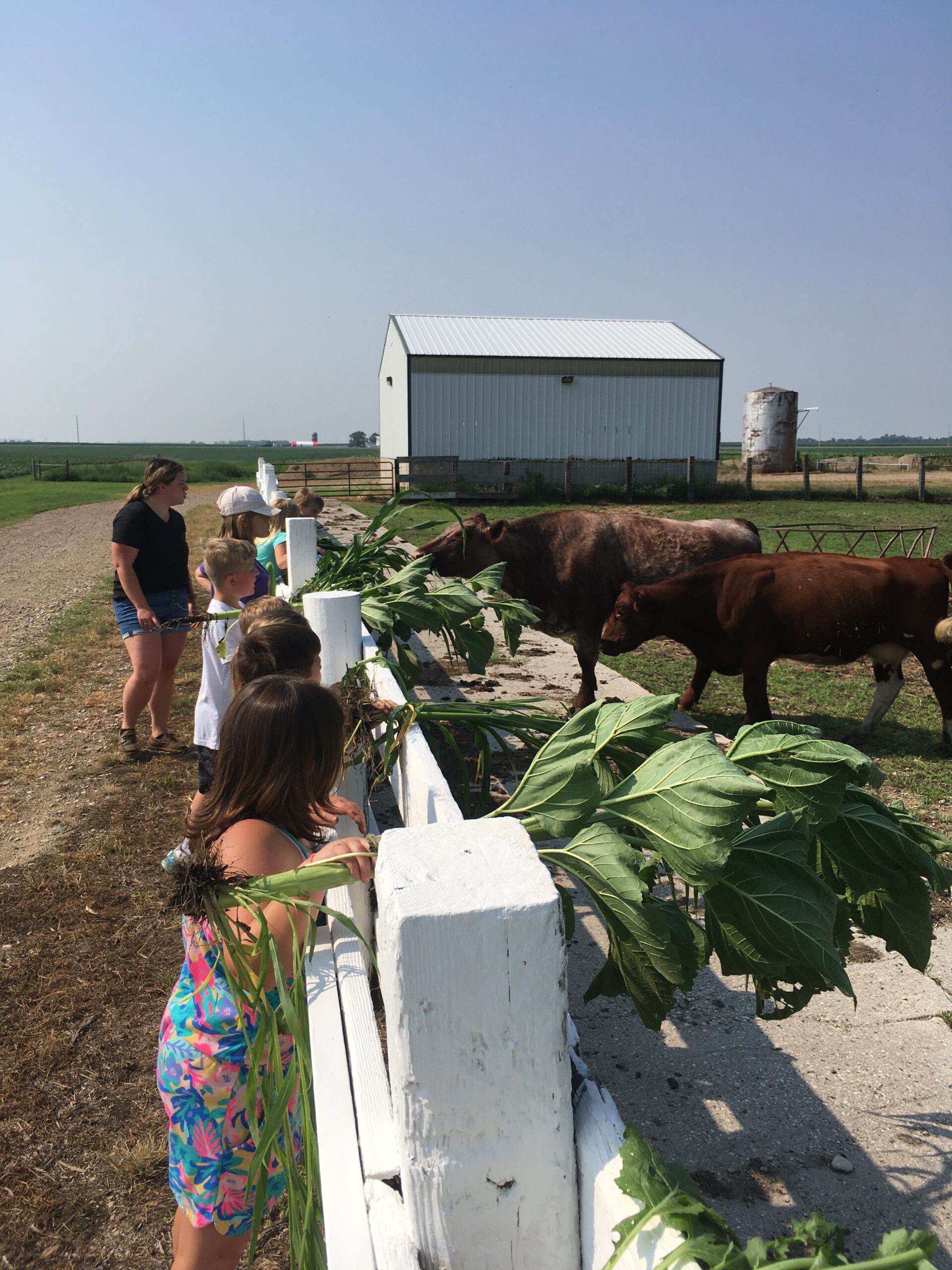 Lukonen said the only challenging aspect to a milpa garden is that it is difficult to harvest, but she had a suggestion on how to make it easier. “Next year I think we are going to create walkways,” she said. “If we want the kids to help with the harvest, we’re going to have to make walking paths throughout.”

Gardeners who are interested in trying a milpa garden can contact the South Dakota Soil Health Coalition at sdsoilhealth@gmail.com or 605-280-4190. 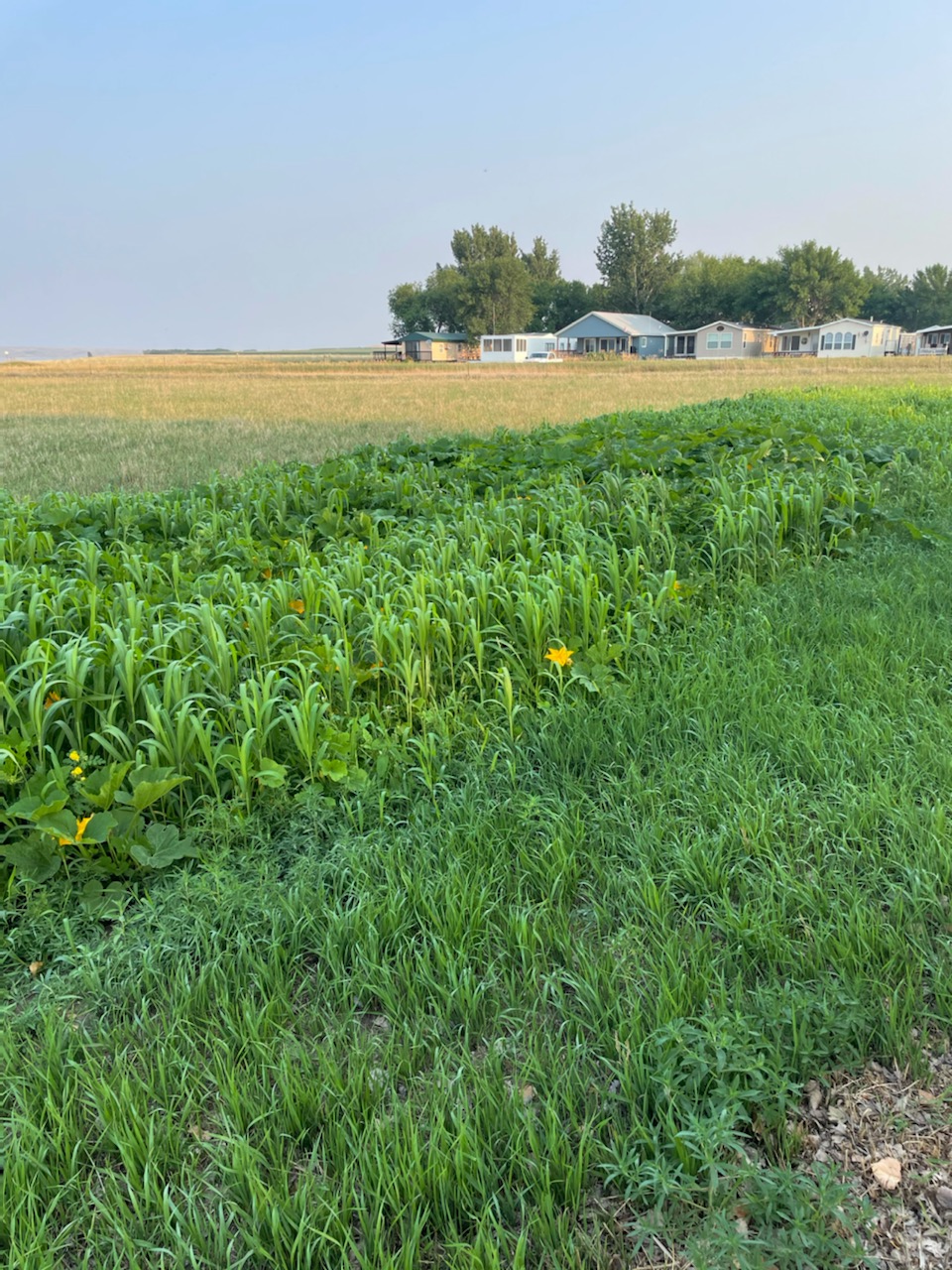 This chaos garden in the West Whitlock Recreation Area entertained local residents who enjoyed searching through the garden for the different types of produce they wanted. Courtesy photo.