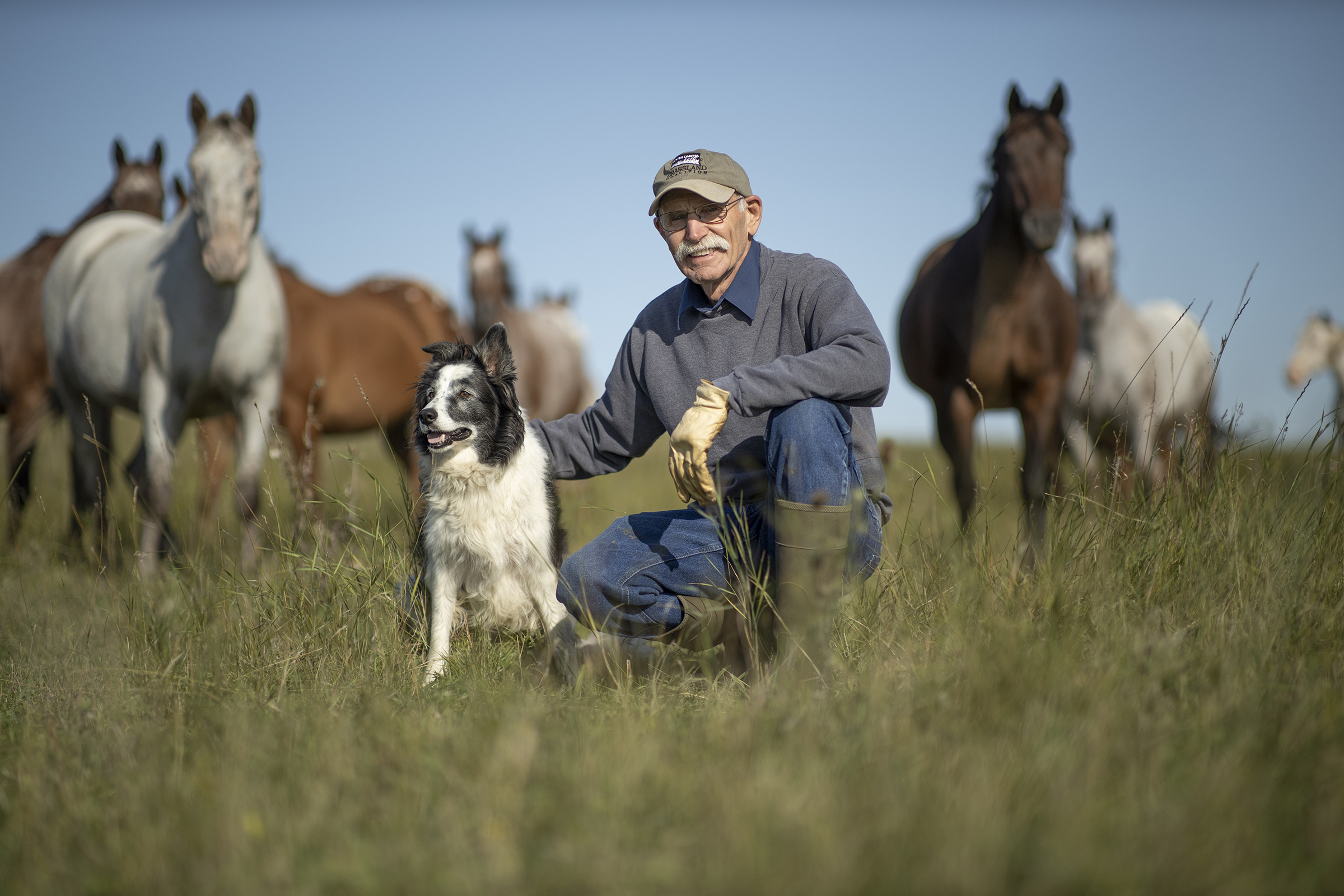 PIERRE, SD – Rick Smith didn’t set out to start a multi-species grazing operation when he took over his family’s farm southwest of Watertown, SD. With higher farm commodity prices in the 70s, he was growing more grain, but when the 1980s Farm Crisis struck, he decided to plant most of his land back to grass and raise more cattle.

Everything else came later.

“It was kind of one of those things, the old 4-H projects. I had three daughters, and they kind of got going on the sheep,” Smith said. “So, then it kind of just grew, and we got a few more of those, and along the way my wife was interested in horses.”

Today, he has a 110-head cow-calf herd and a retired band of 15 broodmares from his years of horse breeding. He also has an 80-head ewe flock and does dry lot lamb finishing and breeding ram sales. Smith’s cows graze separately, but he will allow his ewes to graze with either his yearling heifers or his horses.

While he didn’t add the sheep to his operation because he wanted to improve his land management, Smith has found they have certain benefits.

“If nothing else, it’s a tremendous weed control,” he said. “The ewes prefer any broadleaf weed or clover over grass.”

Before Smith started grazing sheep, he sprayed his pastures for weeds once every four or five years. “When we started running the sheep,” he said, “it was like, ‘Wow. There’s nothing up there to go spray.’”

It took a little time, however, for Smith to figure out the best way to use the sheep for weed control. He first tried to graze them rotationally as he does his cattle and keep them moving between different paddocks using hotwire. That’s when he discovered the sheep preferred some of the weeds and clovers, but only if they were under 6 inches tall. “If they get taller than that, (sheep) won’t touch ‘em,” he said. When he would move the sheep back into a paddock they hadn’t grazed in a while, the weeds would be too tall, and the sheep wouldn’t eat them.

So, Smith decided that if the sheep preferred the weeds but only when they’re smaller, he would let them have continuous access to a larger portion of land and let them move anywhere they want and feed on the plants that they prefer. All of Smith’s sheep pastures have perimeters of five barbed wires with posts about 16 feet apart. His cross fences for horses and cattle allow sheep to travel under a raised wire in traffic areas.

Anywhere the ewes are allowed to graze continuously, they will control or eliminate almost any broadleaf weed. The exceptions to that, Smith said, are cockle bur, biennial thistle and star thistle. He said the sheep will keep Canada thistle from spreading, but they won’t eliminate it.

Rick Smith’s sheep help to control weeds in his pasture, improve his soil health and provide him with another revenue stream. USDA-NRCS South Dakota photo.

South Dakota Soil Health Coalition Soil Health Specialist Dave Ollila pointed out that grazing multiple species of livestock can play a role in soil health because small ruminants like sheep and goats will feed on some of the broadleaf plants. “Those broadleaf plants are deeper rooted,” he said, “so they’re going to bring up nutrients from deep in the soil profile, which will be consumed by the ruminants and then returned to the topsoil via urine and manure.”

Besides multi-species grazing, Smith uses many other management practices that have a positive effect on his soil. Nearly all of his feed is grown on his operation. His pastures are balanced between native range managed for warm season grasses, warm season planted natives and cool season mixtures. His crop rotation includes corn, oats, forage winter wheat, forage barley, and cover crops following early small grain forage harvests. His crops are managed with no-till practices, and the winter accumulation of manure is hauled out to his corn silage fields cut in the fall. His management practices have protected his soil from erosion, kept it productive, and increased its water infiltration rate.

While healthy soil is one way Smith’s operation has become more resilient, his diversified revenue stream is another. He is somewhat insulated against downturns in any one market, and he can take advantage of increased prices in the grain markets, the cattle markets, and the lamb markets.

Producers who would like to take advantage of some of the benefits of adding a species to their operation without risking the investment have an option. The South Dakota Grazing Exchange (www.sdgrazingexchange.com) is a free website where landowners with pastures or crop residue can connect with livestock producers of all types to form private grazing agreements.

When adding a new livestock species to your operation, Smith has one piece of advice.

“Learn all you can about the species you are adding before trying it,” he said. “There is nothing wrong with asking questions. We never know it all.”