Adding life to the soil: Experimenting with compost 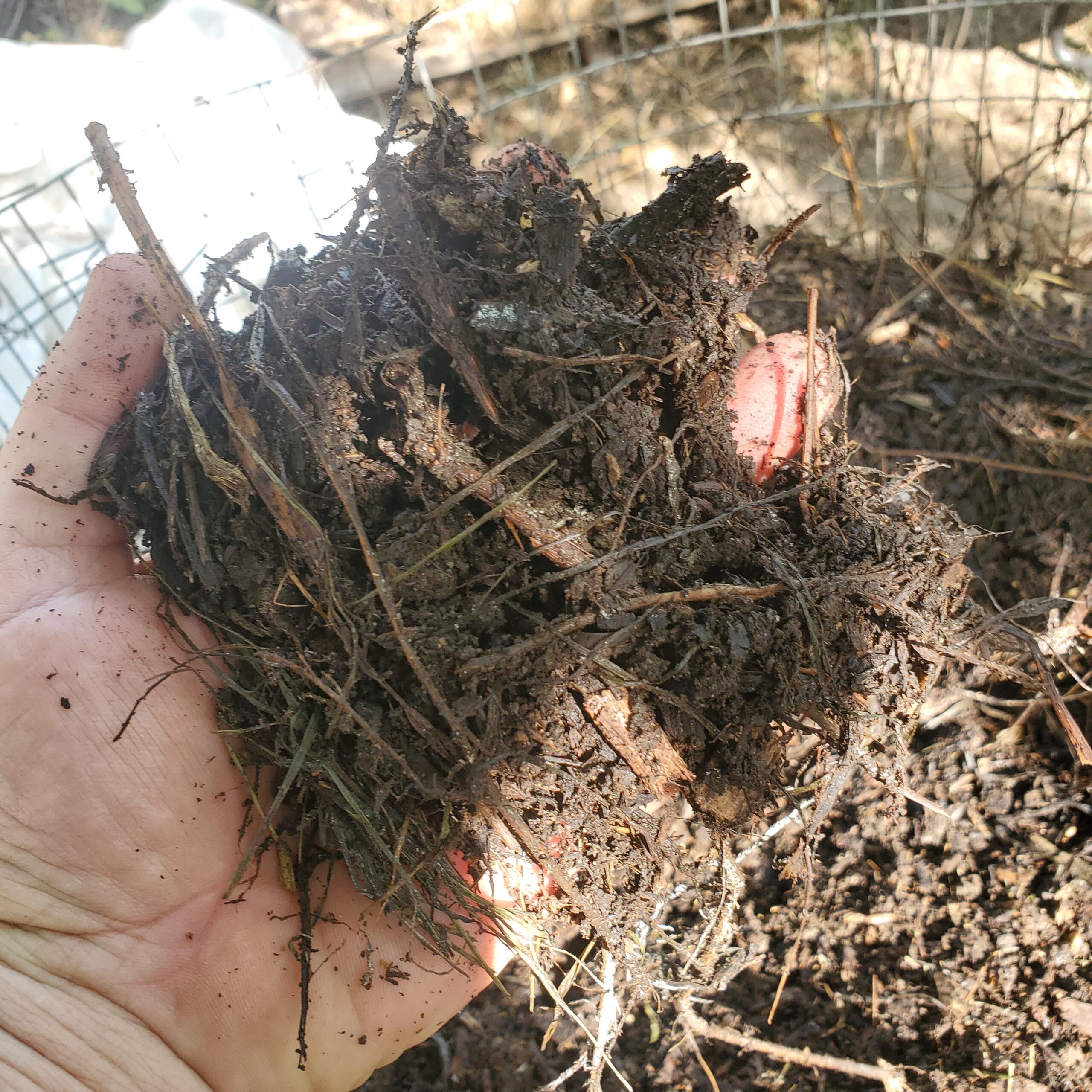 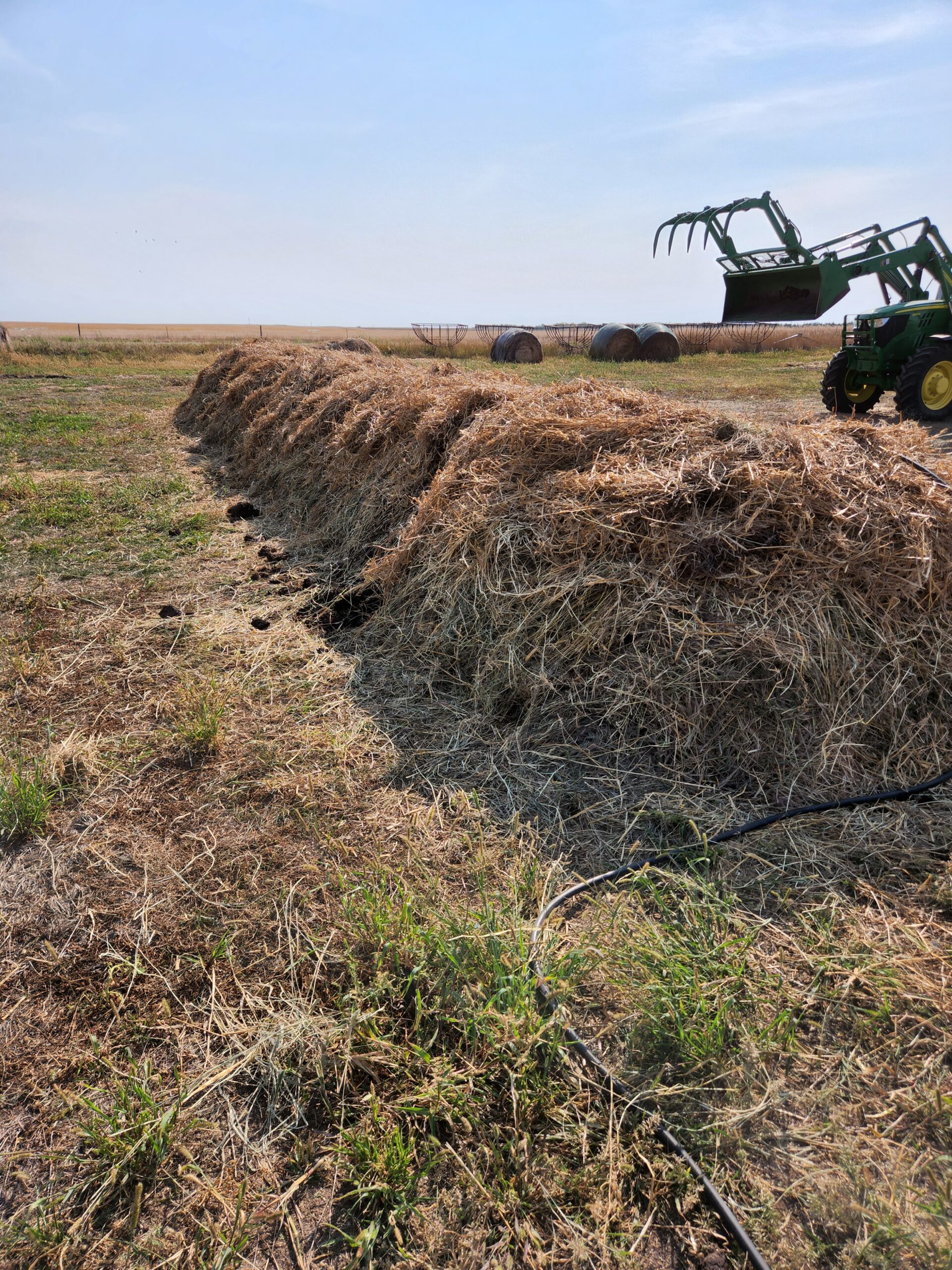 PIERRE, SD – Healthy soil requires healthy, active biology beneath the surface. This includes bacteria and fungi. While the five principles of soil health – soil cover, minimal disturbance, living roots, diversity, and livestock integration – all work to protect and promote these critical organisms, some researchers and producers are experimenting with methods to jumpstart the growth of soil biology to improve soil health.

One popular method is to grow fungi and bacteria in a compost pile and then use the compost to make a liquid extract that can be applied to fields using foliar sprays, in-furrow treatments, and seed coatings.

“Composting is mixing the right materials in the right ratios,” South Dakota Corn Director of Sustainability Jim Ristau said. While there are several different methods, he said, “It’s a matter of mixing carbon and nitrogen and moisture and then managing the heat and oxygen.” 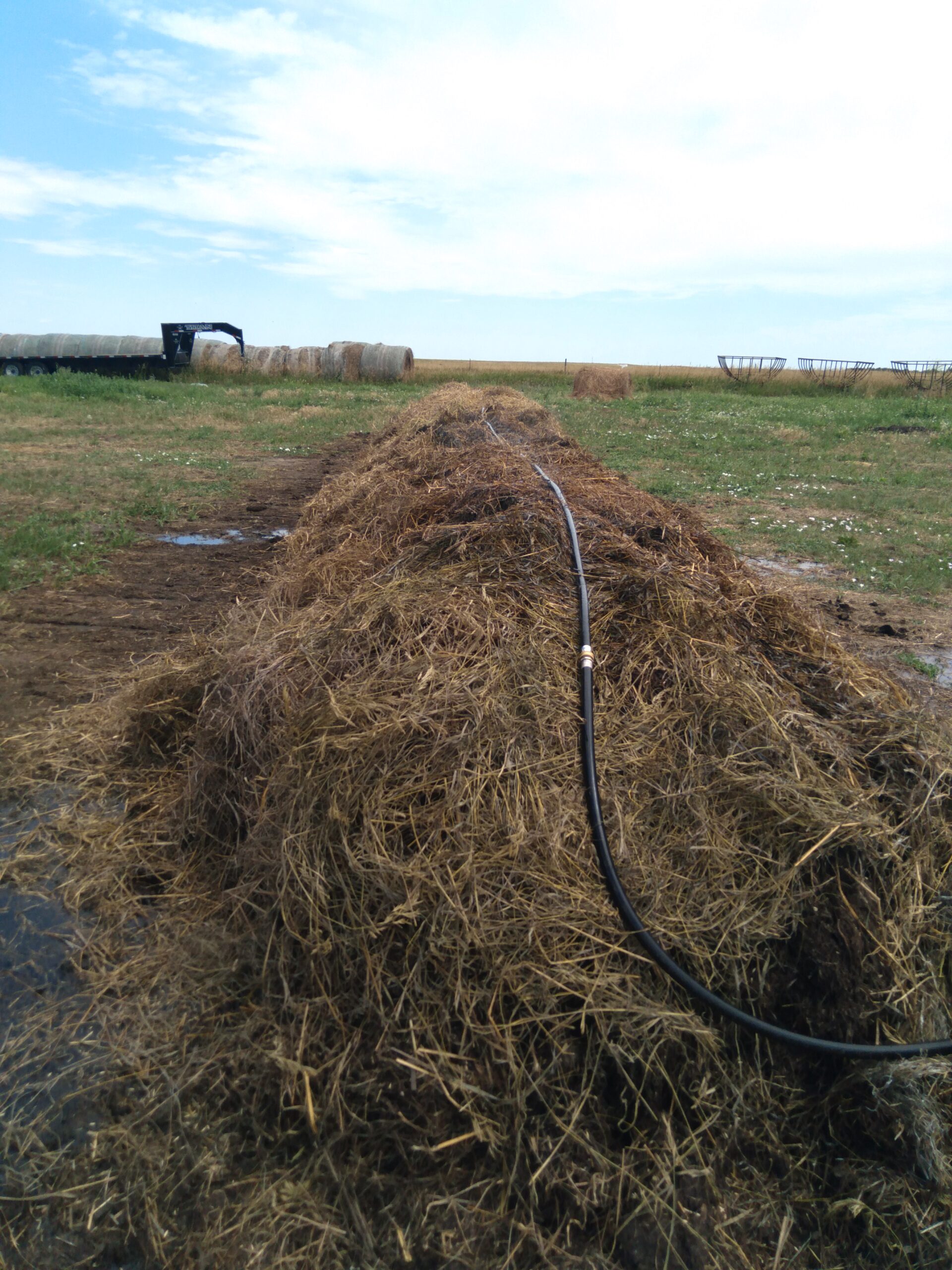 “You’re going to want about 30 percent green material that has some moisture to it,” Ristau said.

Another key ingredient, Ristau said, is some undisturbed soil rich with the native microbiology. This soil could come from an old shelterbelt, homestead, or native grass prairie. “You’re inoculating a pile with that biology,” he said.

Jim Williams is a producer near Herrick, SD, who grows corn, soybeans, wheat, and cover crops. He started no-till practices in 2004 and cover crops in 2008.

At a young age, Williams mastered compost for his garden, but after attending a compost workshop led by Elaine Ingham in 2018, he decided to use compost extract to improve his farm, as well. “I knew the extract was going to work because I had enough compost experience from the past that I just instantly knew it was right,” he said.

Williams now sprays compost extract on his fields, uses it as an in-furrow treatment, and coats his seed with it, as well. He credits the practice with improving compaction in his fields. “The biology is what broke up my compaction,” he said. “It’s everything together. It’s not just biology – it’s biology and cover crops. Cover crops alone, I wasn’t able to do it, but as soon as I added the biology, it broke through my compaction layers.”

He said he also saw increased yields when he started the practice in 2018, but those have declined over the last two years of drought. Still, he is quick to point out that in his wheat, “the flag leaf stays green to the end with no fungicide,” and he hasn’t used a fungicide or insecticide since 2017. 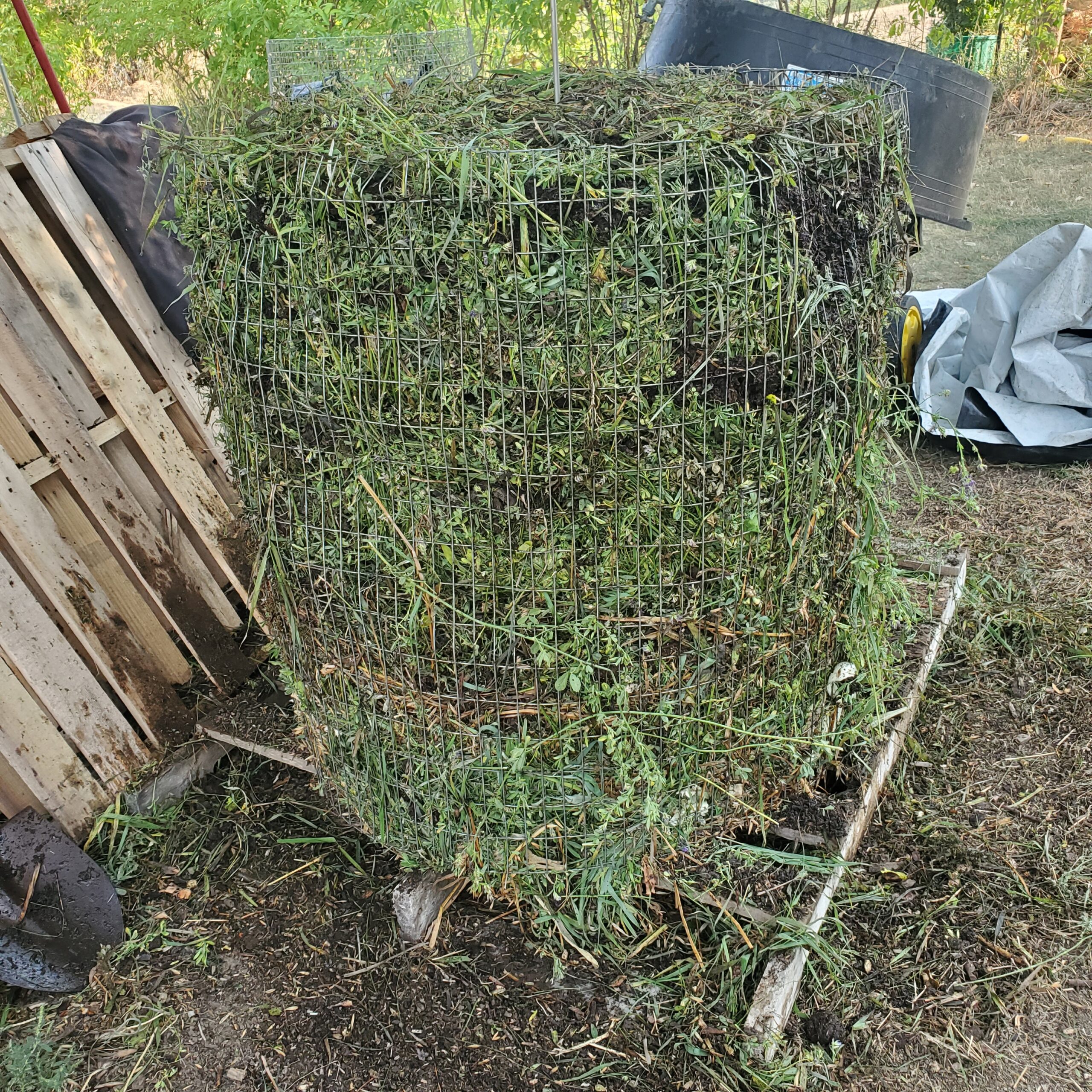 Williams makes 50-foot windrow-style piles with a soaker hose on top for moisture. “I like straw, but it has to be straw that hasn’t had fungicide and insecticides,” he said. He also uses some immature grass hay, alfalfa hay, and some fresh-cut grass from his road ditches, which have a lot of medium red clover in them. “I like to add some fresh grass to the piles because it’s got the live organisms,” he said.

Williams also uses hay off a native prairie, aged manure, compost from a previous pile, wood chips (which must be aged for six months before use in a compost pile), and undisturbed soil from a tree row, old homestead site, or native prairie – wherever is likely to have healthy fungal life. “That’s the whole purpose of the compost is to try to get fungi back in the farm fields,” he said.

Once the materials are added to the compost pile, it will begin to heat up, even in cold temperatures.

“It works just fine in the dead of winter,” Ristau said. “It’s amazing.”

The pile needs to reach an internal temperature of 131 degrees Fahrenheit for three days, and then it’s ready to be turned. If the temperature goes higher than that, it will need to be turned sooner. “If it gets to 150 then you don’t want to go more than two days, and if it gets to 165 you want to turn it,” Williams said. “And that’s kind of the rule of thumb. I mean, it can be at 165 for a day, but then you want to turn it because if it gets hotter than that, it starts killing the good microorganisms.”

Williams said his piles need to be turned four or five times before the temperature drops, and then he lets them sit for 10-11 months; though, Ristau said the pile could be ready for extraction in as few as 30-60 days. 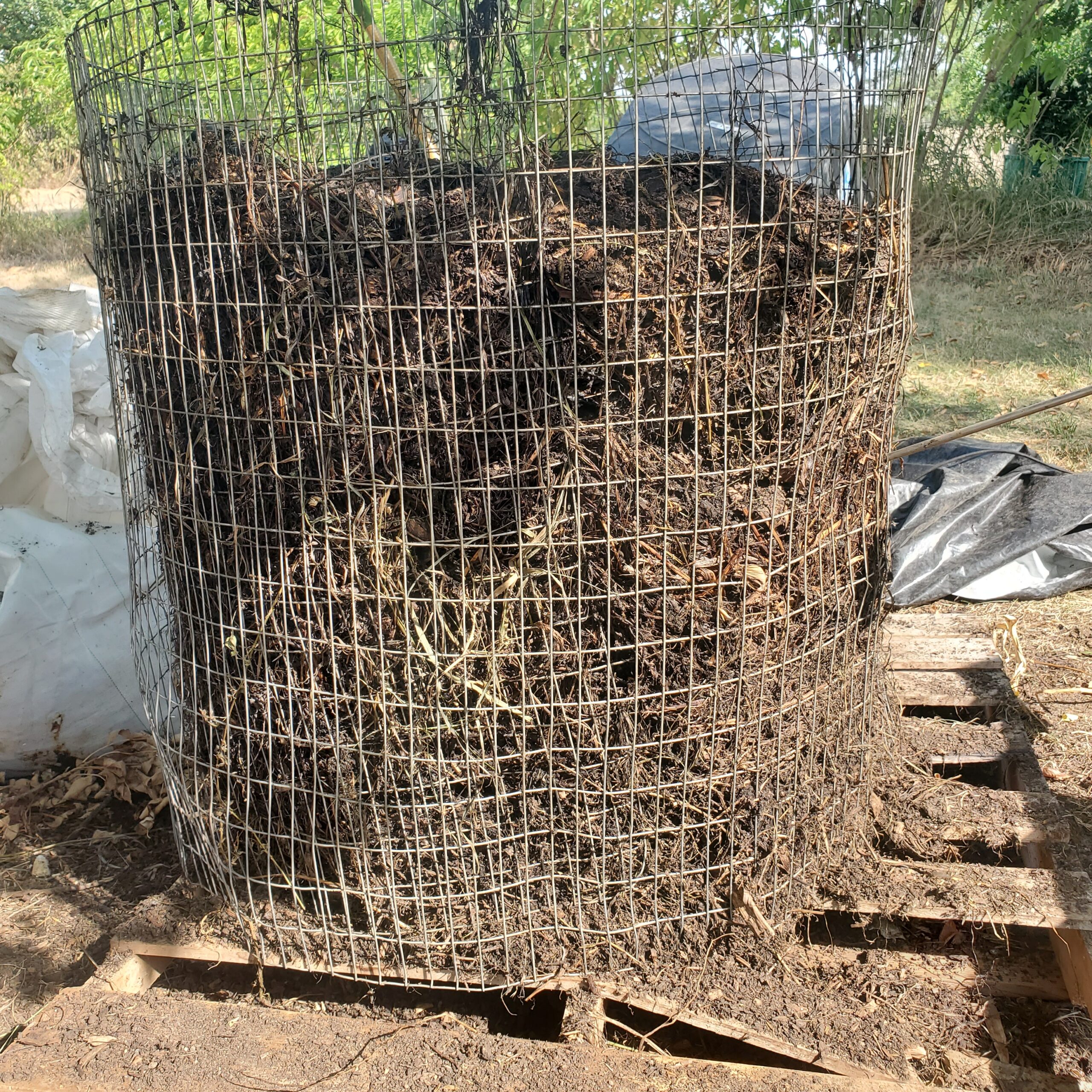 This is the seventh day of a compost pile created by South Dakota Corn Director of Sustainability Jim Ristau. This pile had been turned twice by its fourth day and will likely be turned one more time. Photo courtesy of Jim Ristau.

To create an extract, Williams and Ristau use similar methods. They place some of the compost in a 500-gallon conical tank of water and run forced air into the bottom of the tank. After that aeration process, some of the material sinks to the bottom of the tank and some floats to the top. Williams and Ristau harvest about 350 gallons from the middle of the tank, filter it, and put it in an 800-gallon sprayer. The sprayer is then topped off with water and a diluted food source for the microorganisms, which could include molasses or fish hydrolysate. Then it’s ready for the field.

Researchers are still working to determine the value of compost and the best composting methods and applications. “Even though these practices are not what most farmers are doing to meet the fertility needs of the growing crop, we need to explore the potential for this to work,” Ristau said. “The upside potential of reducing fertilizer input costs and improving nutrient efficiency would be a huge benefit to improving the sustainability of our farms and ranches.”

For his part, Williams is pleased with the results on his farm. “I’m not going to stop doing it,” he said.

This compost created by South Dakota Corn Director of Sustainability Jim Ristau reached temperatures as high 170 degrees and was still 140 degrees on its seventh day. It will be turned one more time and then be allowed to cool undisturbed for six to eight weeks before being used to create an extract. Photo courtesy of Jim Ristau.