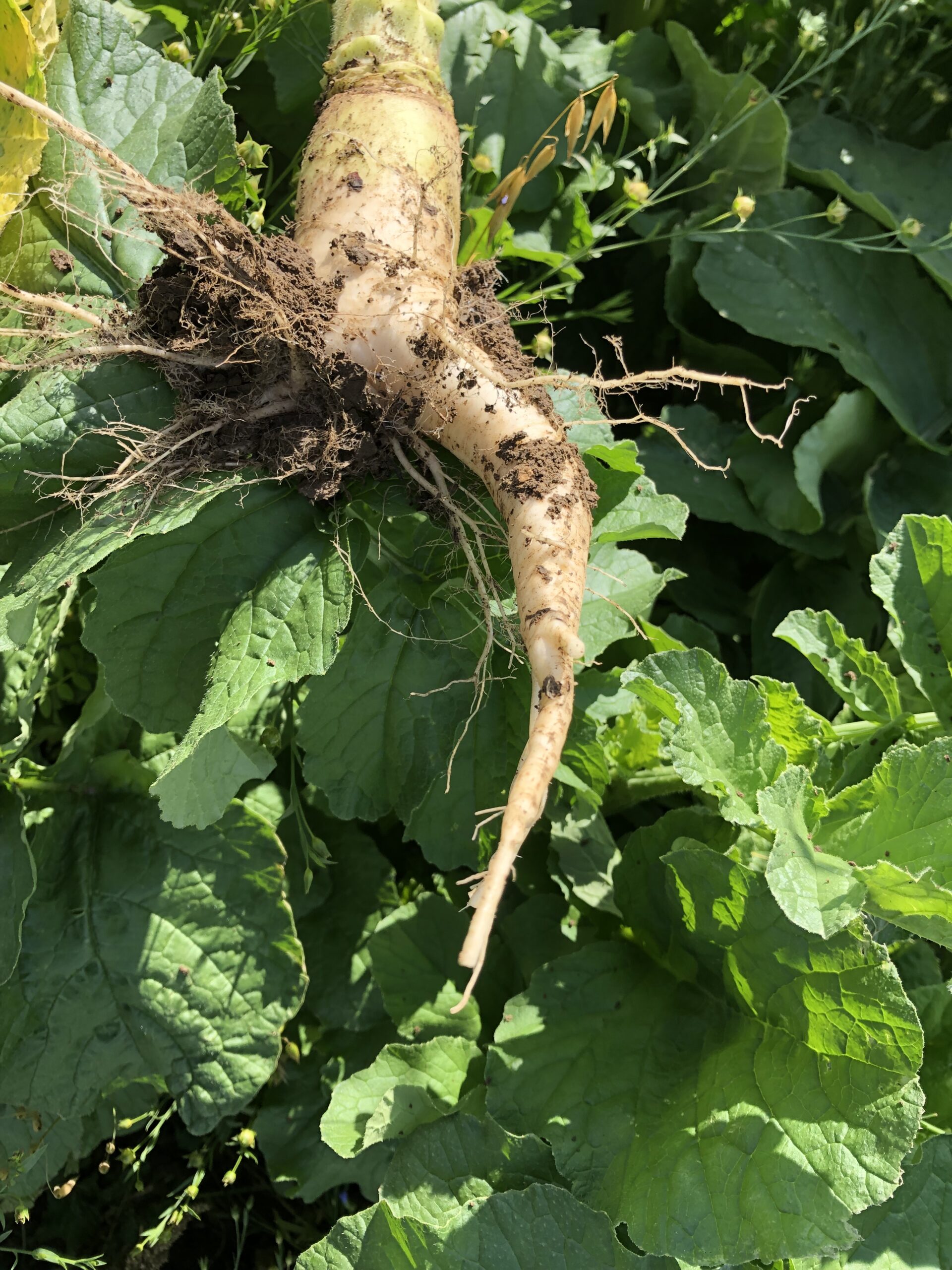 As farm equipment has modernized, it has become much larger. That extra horsepower comes at a cost – and not just the one on the sticker.

“Back in the day, they weren’t recommending any more than 5 tons per axle,” South Dakota State University Soils Field Specialist Anthony Bly said. “And we’ve well exceeded that in most all of our tractors and combines today.”

The weight of farm equipment is supported by the soil, and if the weight is too high or if the ground is too wet when it is worked, it can severely compact the soil, making it more difficult to successfully grow crops. 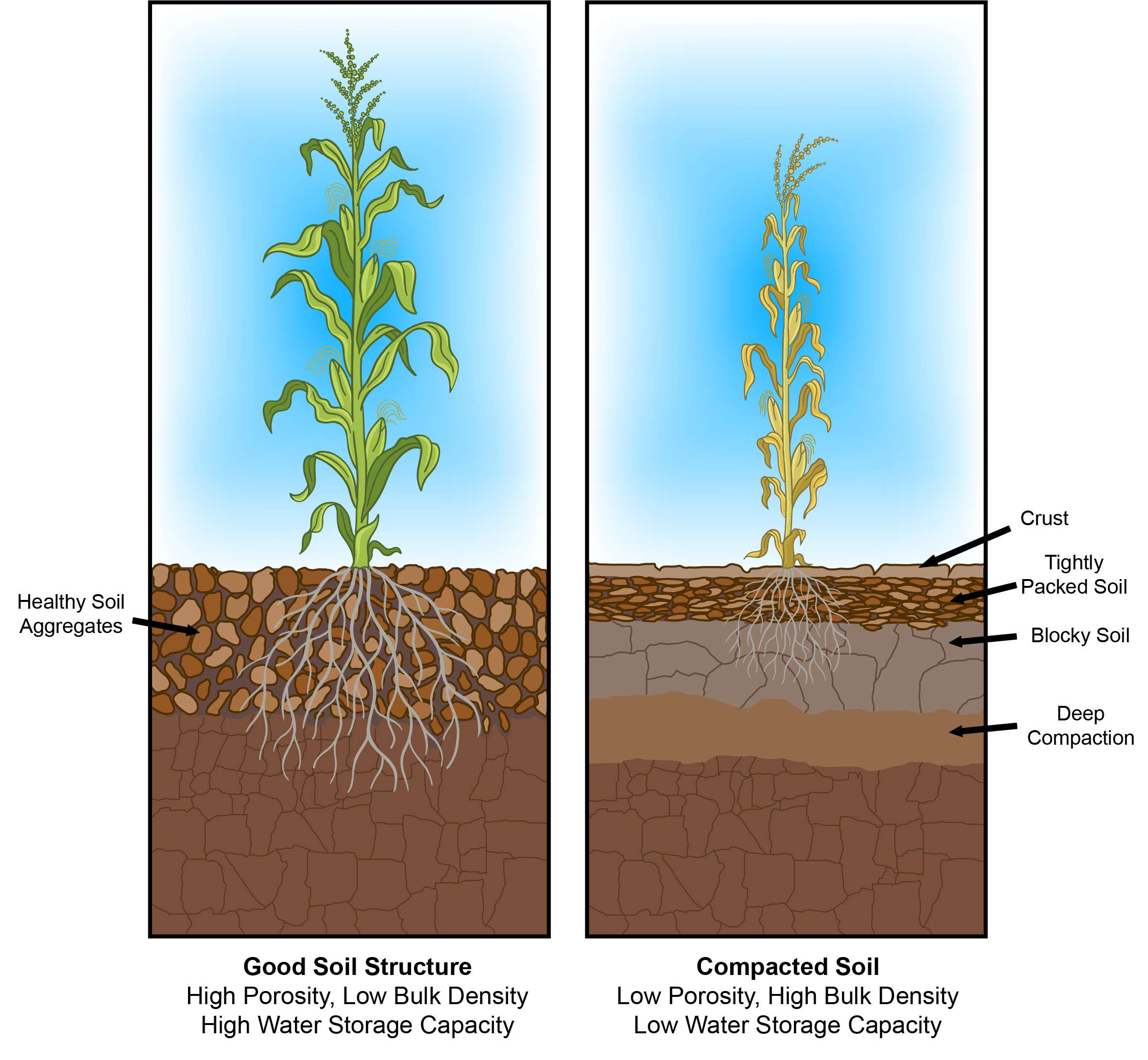 “Porosity decreases, so we have less ability to store water and nutrients – especially those mobile inorganic soil nutrients that are mostly in the soil moisture, the water,” Bly said. “We have less areas for our roots to explore – healthy plants require healthy root systems. And we have less pore space for air exchange.”

According to the SDSU Extension Best Management Practices for Corn, “Soil compaction reduces soil drainage, aeration, yields, root growth, and the ability of plants to recover from disturbance, while simultaneously increasing surface runoff and soil erosion. Compaction can be severe in wet, clay soil, and it is increased by the use of heavy machinery during planting and harvesting, especially in wet soil conditions.”

Bly said that while producers can try to limit surface-level compaction by spreading equipment weight over a larger surface area, using tracks and bigger tires, “the weight of that tractor or that combine is transferred somewhere, and more than likely it’s the deep compaction that we’re really ignoring.”

Tillage is another cause of compaction. “We see tillage uplifting the soil, and we think we’re loosening the soil, but on a micro scale, that tillage implement – whether it’s a shank or a disk blade or a plow – it’s resting on something, and it’s causing compaction on what it’s resting on,” Bly said. “And as it sheers through the soil, it’s pushing the aggregates – the sand, silt and clay – together at the point the sheering is taking place.”

Bly noted that disking is a common practice used by road engineers to compact roadbeds so that water doesn’t enter the soil and cause damage with the freeze and thaw cycle. That’s not a goal producers should have for their fields and pastures.

In 2021, Bly co-authored a study (https://bit.ly/3hSXGcm) that used x-ray scanning to compare the makeup of soil managed with different practices. The study found that soil from no-till fields managed with diversified crop rotation, cover crops, and livestock integration had 57% porosity – space for air and water infiltration – and an internal water movement rate of 4.7 inches per hour. Soil from conventionally tilled fields managed with a corn/soybean rotation, no cover crops, and no livestock integration had 49% porosity and an internal water movement rate of only 0.8 inches per hour. This disparity demonstrates how tillage and a limited crop rotation results in greater soil compaction.

Livestock can also be a cause of compaction if they are allowed to graze a crop field when it is too wet. “We wouldn’t be out there doing field activities with a tractor, so why would we be out there with a herd, a mob, intensively compacting the soil?” Bly asked. He said that if cattle are grazing on cropland, it’s important to have some place to put them, like back on a perennial, when soil conditions are too wet.

Producers can limit their tillage and keep livestock off wet cropland, but they are unlikely to transition to smaller equipment. The best way for them to fight compaction caused by heavy equipment, Bly said, is with living roots – cover crops and diverse crop rotations.

“Let the roots and natural biology, a plant’s biology, do that work,” he said. “Every root has some compaction fighting capability. That’s why crop rotation is important. That’s why a diverse cover crop mix is important, to have fibers and taproots and all those gradients in between.” 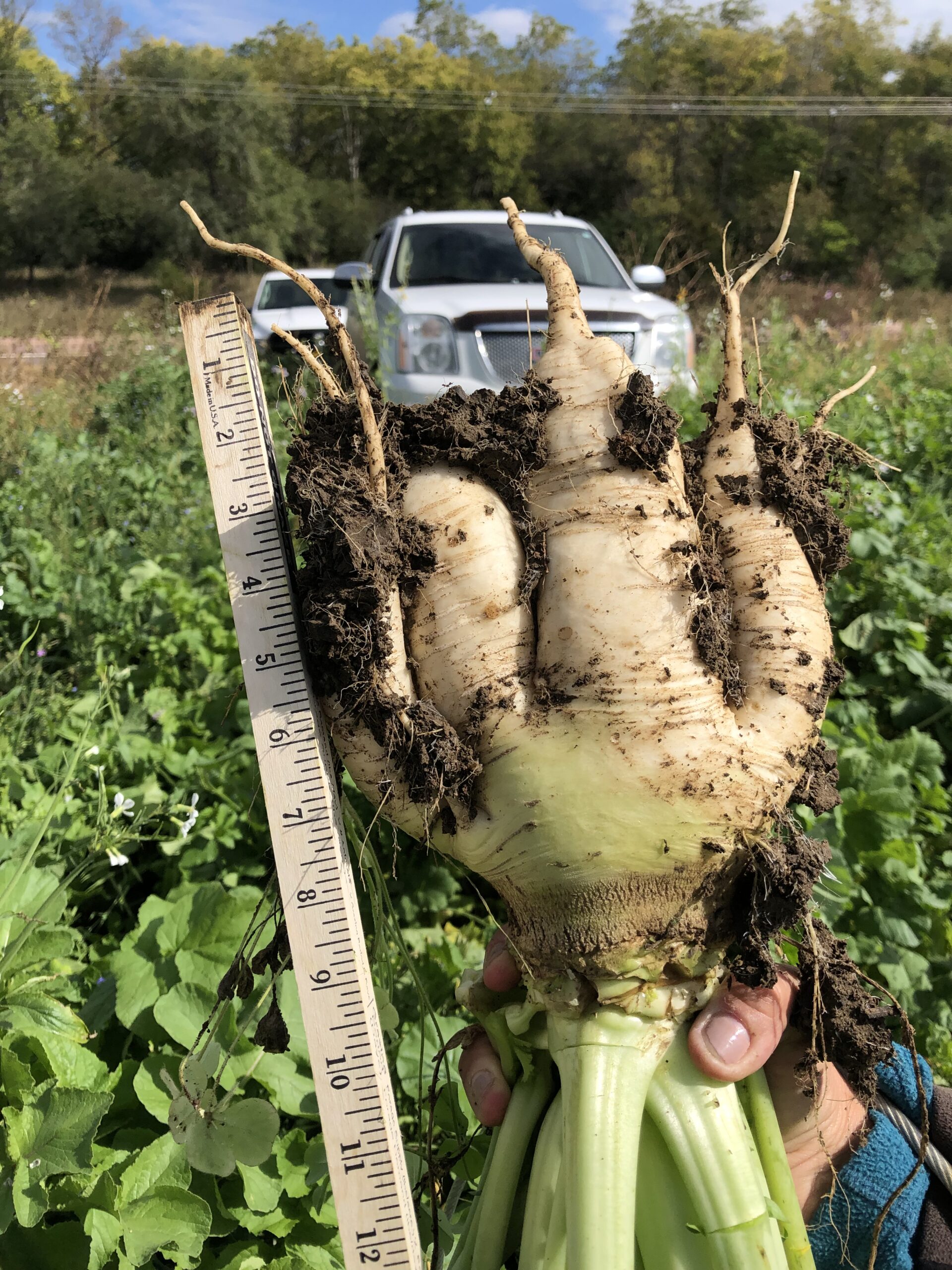 Kurt Stiefvater, who has a cow-calf operation and grows corn, soybeans, oats, and winter wheat near Salem, SD, said that to avoid compaction on his operation he uses no-till practices to help limit traffic in his fields and waits to work in his fields until “the soil is dry enough that you don’t make extra compaction layers in there that go deeper in the soil profile.”

He also uses other soil health management practices to fight compaction. “I’ve improved my soil structure quite a bit with the no-till, multiple crops, using cover crops as part of my feed source for my cow-calf operation,” Stiefvater said, “and building the aggregate stability in the soil really helps keep that compaction down.”

He also varies the direction of his rows between crops. “If I go diagonally one year, I’ll try to go the opposite way the next year and plant my soybeans and small grains in different directions,” he said.

Stiefvater also said that using rotational grazing helps limit compaction from cattle trails in his pastures, and when he’s grazing his crop land, he tries “to spread the water source around a little bit and give them different options.” He noted that he does most of his cover crop grazing in the winter when the ground is frozen, so compaction from livestock is less of a concern then.

For producers who would like to try cover crops, Bly said that since all roots have some compaction fighting ability, it’s better to pick a diverse cover crop mix that will meet producers’ operational goals. “A living root, just period, is in my mind the important thing to focus on,” he said.

“If you can, get some deep-rooted plants in your rotation at some point to help break up any hard pan that has developed,” Stiefvater said.

This radish was affected by soil compaction. The root was forced to grow horizontally until it found space in tightly packed soil to continue growing deeper. SDSU Extension photo.