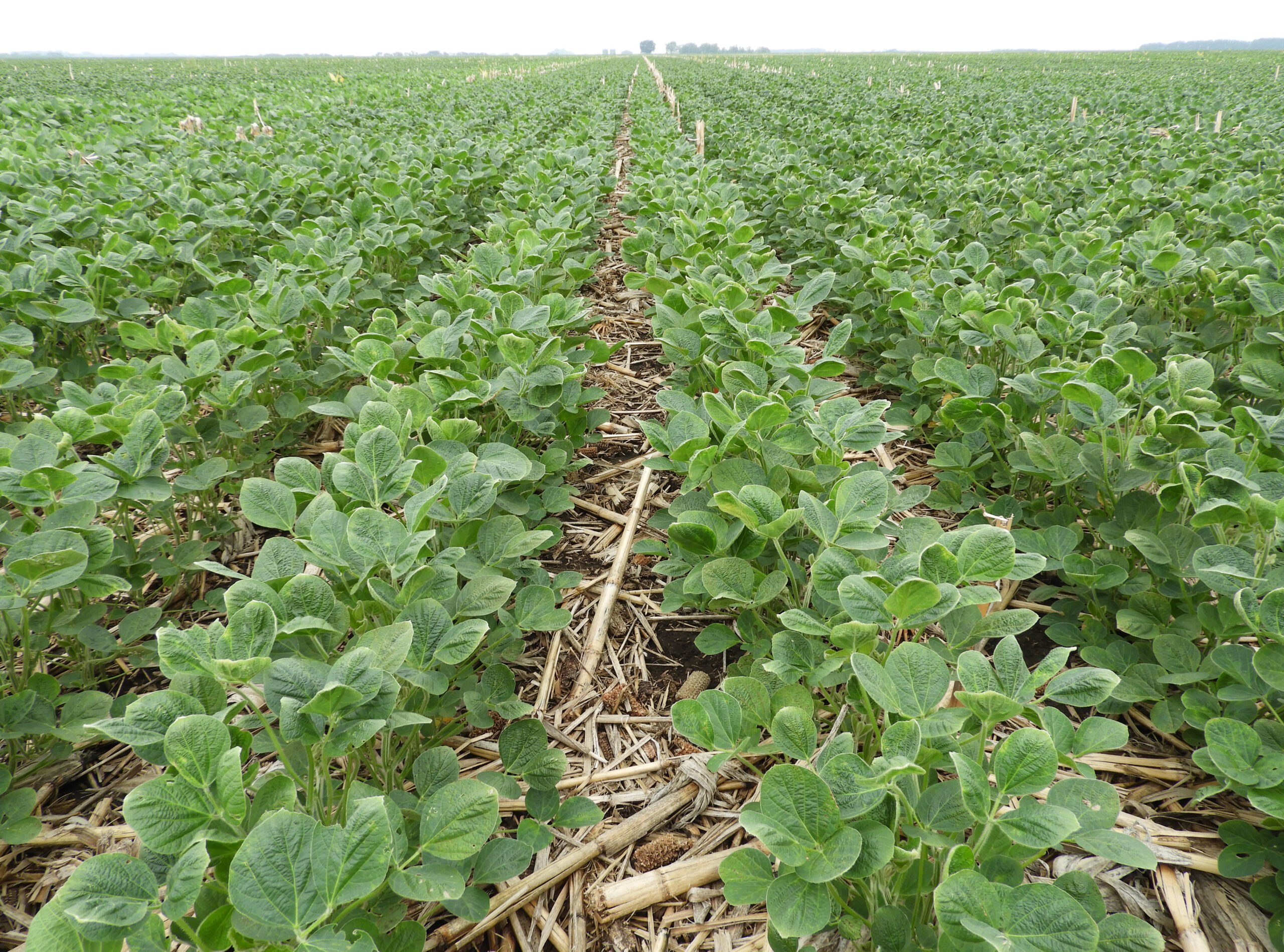 PIERRE, SD – What’s left behind after a cash crop can be pretty valuable if it remains in the field.

It can be tempting to cut corn for silage or bale oat straw to feed to cattle when yields and feed supplies come up short. But there are major costs to removing residue.

In northeastern South Dakota near Twin Brooks, farmer Dave Kruger planted his soybeans on light, sandy ground and watched them burn up in last summer’s heat. Across the road, soybeans planted in the same sandy soils held on.

The difference was that the second field of beans grew through a thick mat of rye straw. It took another two to three weeks to see signs of heat stress, Kruger said.

Residue’s role in moisture retention is two-fold. It acts like a lid, keeping soil covered and moisture from escaping. It also helps build organic matter and carbon, which in turn increases the soil’s capacity for holding water.

Kruger is short on moisture again this year. Most of his farm has seen 10-11 inches of rain or snow since January – about 3-4 inches below normal.

But Kruger’s crops continue to pull through.

“It definitely has helped it hold on and survive through drier spells,” Kruger said. 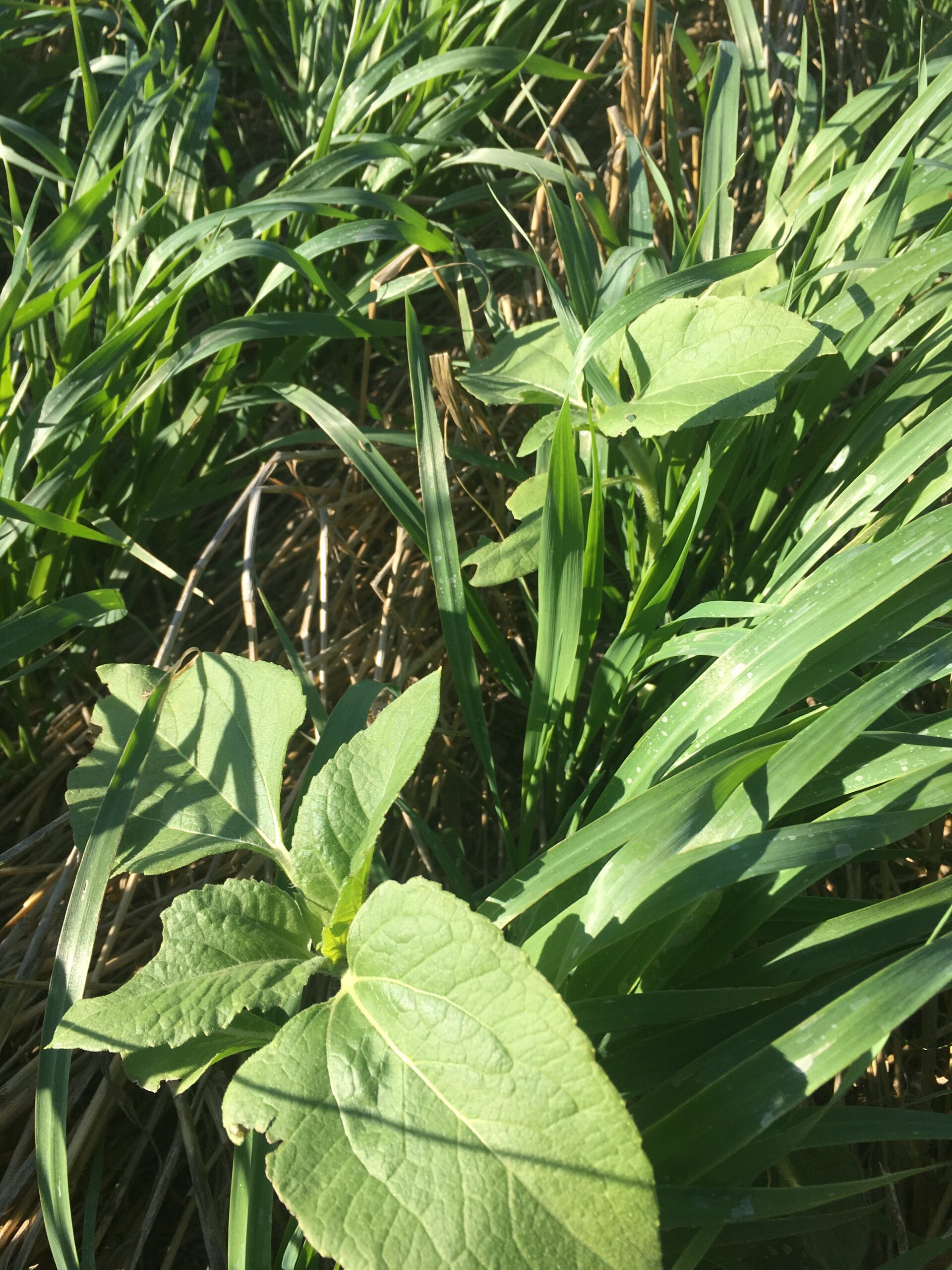 It wasn’t a great year for small grains in central South Dakota. Marvin Schumacher, who farms north of Pierre, had to abandon one of his oat fields because the grain just didn’t fill in the hot, dry summer.

Even so, he left the failed oats instead of putting them up for hay.

“I hate to remove residue anytime if I can help it. What you lose for residue doesn’t pencil out,” he said.

Some of the most concrete costs of removing residue come from the nutrients that must be replaced when straw and stalks are baled up and hauled away.

A ton of dry harvested corn residue contains 17 pounds of nitrogen, 4 pounds of phosphorus, 34 pounds of potash and 3 pounds of sulfur, according to research from the University of Nebraska-Lincoln. At today’s fertilizer prices, each round bale of corn stalks would add up to $32.61 worth of fertilizer.

The nutrient values of wheat straw and soybean residue are a little less, with 1 ton of wheat or bean stubble at around $20 worth of fertilizer.

Those numbers align with what Kruger has experienced on his farm. He has four quarters of ground that have been managed with continuous light tillage. While most of his ground has been no-till since 1993, those acres serve as a good side-by-side comparison. When it comes to fertilizer, his no-till land saves him $20-30 per acre per year.

“I think that’s the result of building that organic matter,” he said. “When you take any of the straw or the residue, you’re just carrying more fertilizer off the fields.”

“When you take off residue and you don’t replace it, that’s a permanent thing. It takes a long time to recover from that,” he said.

A lot of less-than-stellar corn crops are being cut for silage this year. That takes a lot of potential residue out of the mix.

He also urges producers who cut silage to consider changing their rotation if they were going to plant soybeans next year. Growing a high-residue crop would be more appropriate. Producers will have to factor in the nutrients they’ll miss out on and maybe apply some manure to bring some of that fertility back.

“You’ve turned a high-residue crop, corn, into a low-residue crop. With two low-residue crops in a row, it could cause some real issues,” Beck said. “The worst thing you can do to a piece of ground is to take the forage off year after year.”

According to Beck, the best rotations are made up of 80% high-residue crops such as corn, wheat and other cereal grains. 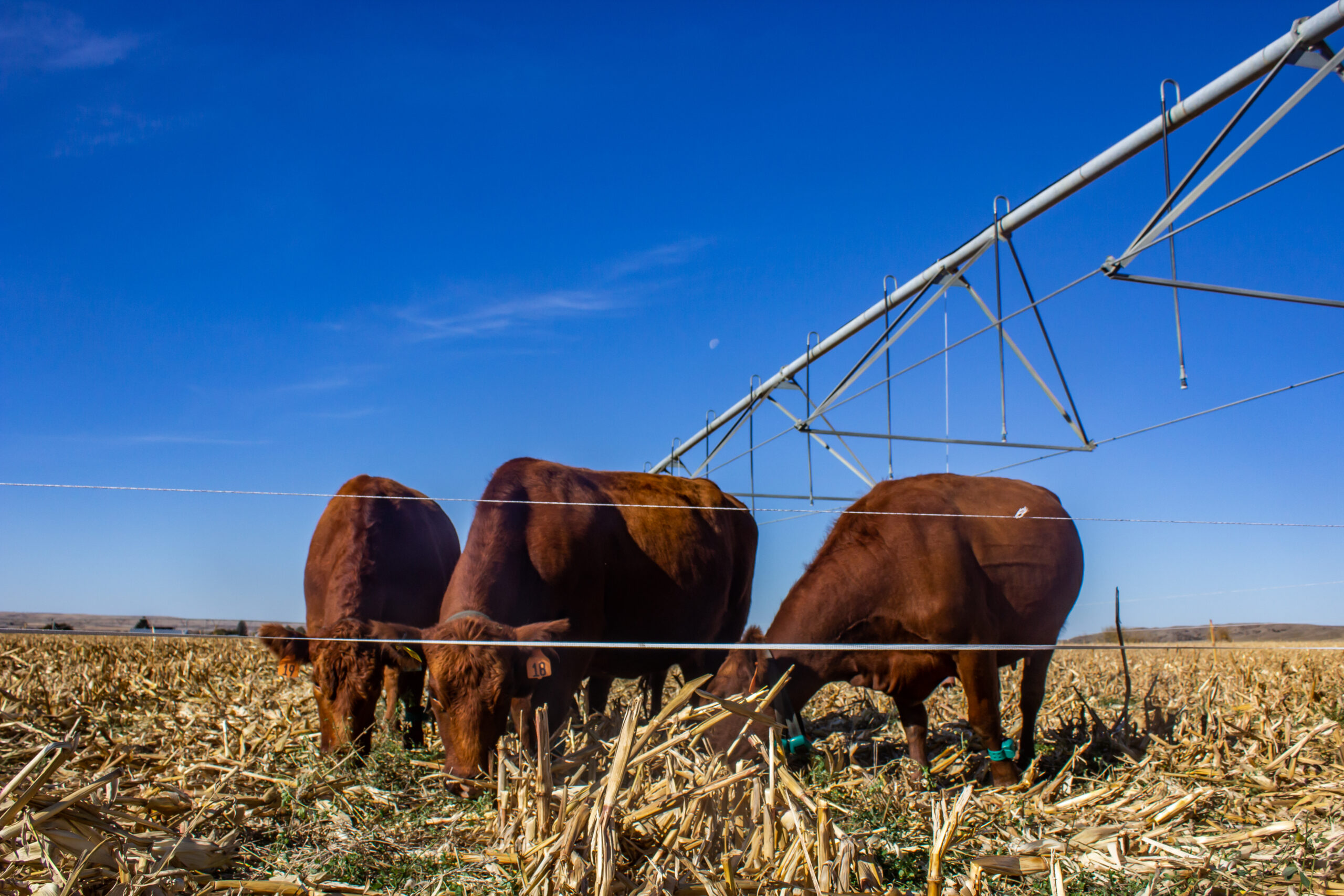 Grazing is a great way to use residue as forage and build soil health at the same time. USDA NRCS-SD photo.

Combining his oats in south central South Dakota this summer, Clint Vanneman could look down the row and see residue from the previous milo and wheat crops. Those layers of cover helped to hold moisture and insulate the ground.

“The ability to save some of it for a dry day is big,” said Vanneman, who farms near Ideal with his son Justin. 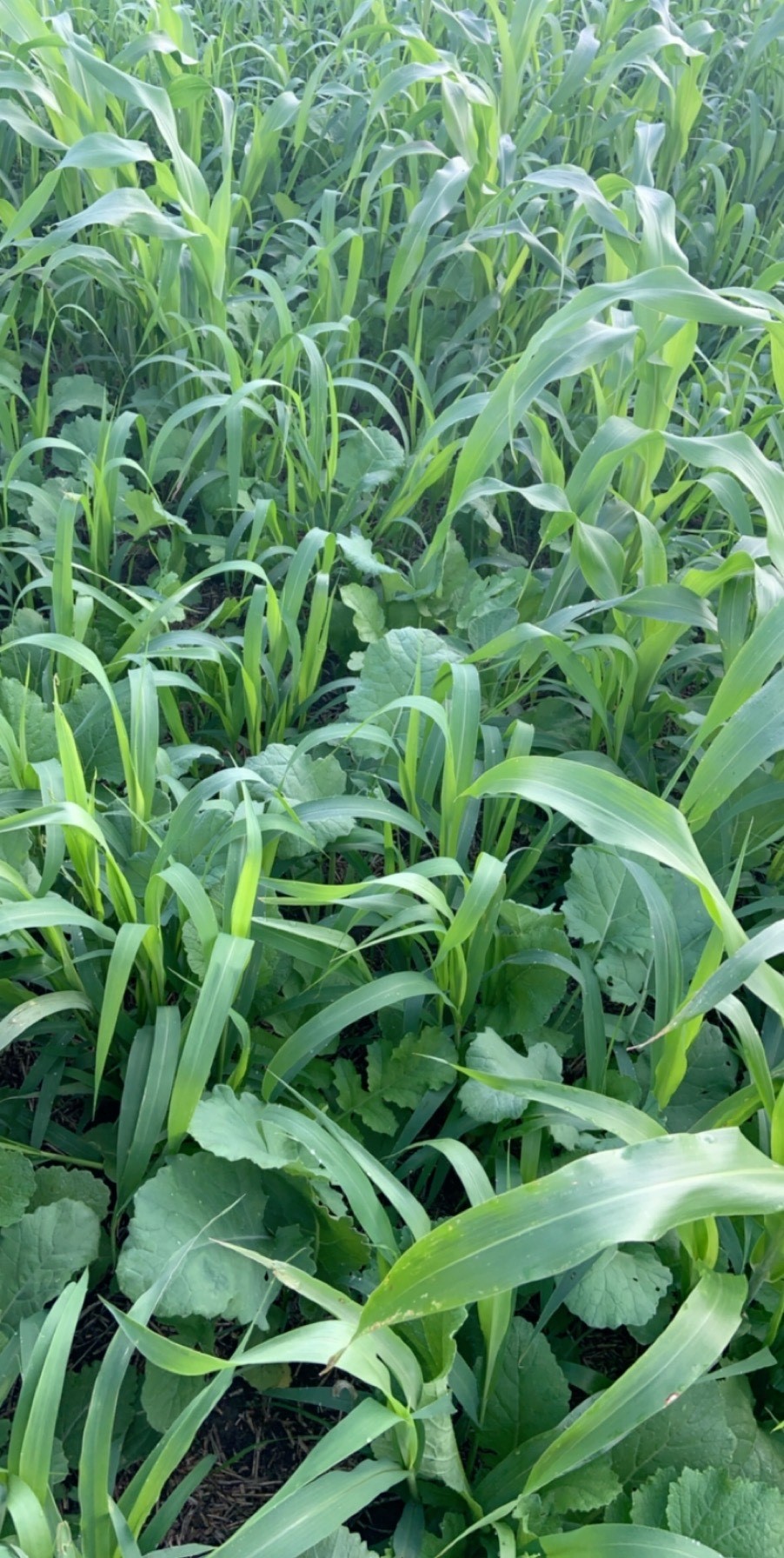 This cover crop at the Vanneman farm was grazed by the family’s cattle in the winter of 2020. Photo courtesy of Justin Vanneman.

No-till management, residue, cover crops and a diverse crop rotation work together on the Vanneman farm to build soil health. They’ve been able to reduce applied nitrogen as their organic matter has climbed.

Carbon feeds a thriving community of micronutrients below ground, and that contributes to a healthy soil structure with stable pores that can move water through the soil profile.

“That’s where you get your water infiltration and your root development,” Schumacher said.

Schumacher pays close attention to soil cover in his rotation. He plants two years of corn to build residue and rotates to soybeans, wheat, then a cover crop before going back to corn.

Planting through heavy residue can be a problem, which is why his planter is equipped with a trash manager that moves the residue to the side as he makes his furrow. The cover also cools his soil in spring, so his crops start slower.

“They will look a little worse at the beginning, but this time of year, it really starts to shine now,” he said.

Schumacher sees the benefits of a residue cover in his irrigated fields, saving him 4-6 inches of water a year.

“It’s cut our water use by a third with no-till management and residue cover,” he said.

The Vannemans work to make sure the residue is evenly distributed after harvest. Most of the time, the combine does a pretty good job of spreading it out, Justin Vanneman said, but sometimes in wheat or oats he’ll run over it with a harrow to spread the straw.

The Vannemans’ cattle benefit from the residue, as well, grazing the wheat stubble and the cover crops planted into it after harvest.

“In the fall and winter time, that’s where you’ll find our cows,” Justin said, adding that they manage their grazing to be sure the cattle don’t remove too much.

“If grazed appropriately, very little nutrient goes away,” Beck added, “You keep a lot of the armor there, you just change its form a bit.”

When it comes to cover crops and residue, bigger is better. Over the winter months, soil cover catches snow and holds moisture.

The Vanneman farm didn’t get much snow last winter, but milo stalks caught what fell, and the oats planted into those stalks in early spring reaped the benefits.

Some harvest small grains with a stripper head so the straw is left standing in the fields.

“There’s a lot of value in leaving it on the ground,” Vanneman said.